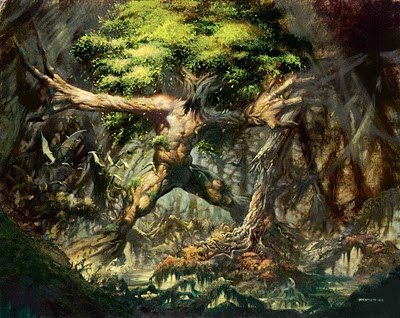 One of the oldest races of Blackmoor, older than the elves by far are the Tree Lords. Sometimes called Ents, these walking tree like humanoids are as ancient as the oldest forests of the planet.  Ordana the Forest Mother is said to be one of the first generation of Tree Lords. After her ascendance to Immortality, she created the elves. From the birth of the elven race, the forests took care of them. As the elven race matured, the elves learned to care for the forests, like children growing up to care for their aging parents. In the North, King Uhlmar instructed the elves to care for the Tree Lords.

The Oldest Tree Lords are known as the Gakkaraks. These creatures are easily mistaken for dark moss covered trees. These ancient ones have grown bitter over the centuries, recenting all but those who show the utmost respect for the woodlands. Gakkaraks have a special connection to the forests they live in, being able to sense intruders of any sort. In addition to the Wizard of the Woods himself, Druids are the only humanoids that the Gakkaraks will fully tolerate. Even the elves are viewed by suspicion by these woodland giants.

The more common of Tree Lords are usually referred to as Treants. In the Age of Blackmoor, Treants are the servants of the elves. Treants are often called for when elven realms are threatened. It is not unheard of to see armies of Treants marching at the command of elven lords. In the great wars of the North, Treants under elven leadership have been known to serve both Blackmoor and Thonia in various alliances.

As the elven race became divided, Treants remained loyal to the Cumasti elves. In the Western Woods, they no longer obey the Westryn, but instead act as they see fit for themselves. A powerful Gakkarak lives within the borders of the Duchy of Ten. His name is Benoit and he cares little for the affairs of man, trying to stay out of the recent conflicts in that part of the world. Still a creature such as Benoit would be a vast source of information, having lived for such a long time. He even remembers Halgred Forestwalker, the first druid in this part of the world.

In the Cumasti Woods, Treants remain loyal to Menander Ithamis. With the elven lord’s alliance with King Uther, it is not unlikely that armies of Treants could once again be called upon in the service of Blackmoor, just like in the days of King Uhlmar.

Ents are listed in the FFC as available army units for both Vestfold and The Great Kingdom (later Thonia). The term Ents was of course removed from later D&D products along with hobbits and  other terms borrowed from Tolkien.  Still, it is fascinating to imagine armies of Tree-men marching to war in Blackmoor, similar to how Tolkien described in Lord of the Rings.

The DA modules did not feature Ents, but a new monster, the Gakkarak was introduced there. It was later included in the Creature Catalogue. Gakkaraks are more powerful than the Treants, which is what D&D’s Ents ended up being turned into, but the Gakkaraks are also more hostile towards humanoids.

Ordana, originally a Treant herself appears in the Mystara product line, but Ordana is also the main patroness of the elves in the ZGG Blackmoor line.