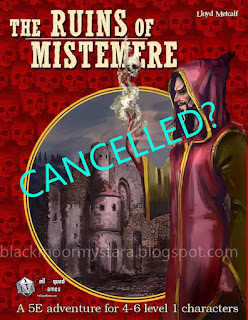 Failsquad Games recently announced a new Kickstarter featurng a reimagined version of the legendary 1983 Red Box intro adventure featuring Bargle and Aleena. Labelled The Ruins of Mistemere (after the Red Box's Castle Mistamere), the adventure promised in the Kickstarter also included several of the characters from the dungeon with their names slightly altered.

Now as some feared right from the start, this concept may have been a little too close to the original. At least Wizards of the Coast thought so and had the Kickstarter shut down. Kickstarter now only displays the following message:

The Ruins of Mistemere - a 5E adventure is the subject of an intellectual property dispute and is currently unavailable.
If you are interested in this project, please check back later. Thanks for your patience.

The reason for seeking to get this project shut down by WotC is listed as follows:

Re: The Ruins of Mistemere - a 5E adventure
Description of copyrighted material: "The Ruins of Mistamere" was an adventure found in the classic Advanced Dungeons & Dragons Red Box - a starter set for D&D created in 1983.

Description of infringing material: This Kickstarter plans on recreating an "inspired by" version of our copyrighted material. It is derivative and not authorized. As you can see from their own description, anyone familiar with the original material would know what they are trying.


Castle Mistamere is an iconic dungeon and Frank Mentzer's tragic story about Aleena the Cleric and the evil Wizard Bargle have inspired generations of gamers. The characters made it into the Mystara setting with Gaz1 Grand Duchy of Karameikos and have been revisited since in the Kill Bargle adventure in Dungeon #150. It would be really nice to see this adventure reimagined for the current edition of Dungeons & Dragons. That said, Wizards of the Coast's objection in this case does not strike me as unreasonable. (Even if they called it the Advanced Dungeons & Dragons Red Box... ;) ).

Lloyd Metcalf of Failsquad Games told me he understands WotC's position. He felt "they were in fair use territory", but stresses that FSG does not want to infringe on anyone's IP. It looks like that is the end for this product. The company is moving on to work on an Old School fanzine called "Maximum HP"