The Piazza is 5 Years!

On this day, 5 years ago my friend Ashtagon, set up The Piazza. It immediately became the home of hundreds of D&D fans. Now the site has more than 1300 members including legendary game designers like Bruce Heard, Frank Mentzer, Monte Cook, Tim Beach, Allen Varney and many others.

Unlike many other D&D forums out there, the focus of The Piazza was alwas Campaign Worlds.The fan communities of Mystara and Spelljammer are particularly active on the forum, but also fans of Dragonlance, the Forgotten Realms, Blackmoor and all the other D&D Worlds are present as well as other Campaign Worlds such as Talislanta and the Traveller Universe.

For many of us, the friendly atmosphere of The Piazza has made us feel so much at home there that we visit several times a day. I can't believe that the last 5 years have passed so quickly. I hope that the next 5 years will be as much fun as the past ones have been!

While the birthday is today, the party will be this weekend, so stay tuned for more info on that! :)

D&D fans love hearing about famous people who have played our hobby. Joss Whedon, Vin Diesel, Kevin Smith, Metallica, My Chemical Romance, the list is too long to mention everyone here. We all know Wil Wheaton was a D&D player of course, but I did not know that he had journeyed to Mystara. "I started playing with the 1981 Red box" Wheaton says and goes on to mention having throughly explored the Caves of Chaos (B2 - Keep on the Borderlands) and many other known D&D locations.


Wheaton then goes on to mention what may have been the peak of his D&D career "One time, I even talked to a wizard named Bargle." What happened when Wheaton explored the caves north of Threshold in the world of Mystara? Was he magically ensnared by Bargle, like the rest of us, or did he manage to talk himself out of it?

You can listen to Wheaton talk about his early D&D memories at the video recording of the PAX 2012 Penny Arcade DND Celebrity Game (Not Safe For Work: Strong language). Thanks to my friend David Fryer at The Piazza for pointing me in this direction. 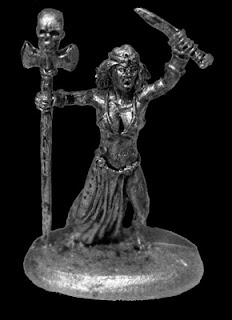 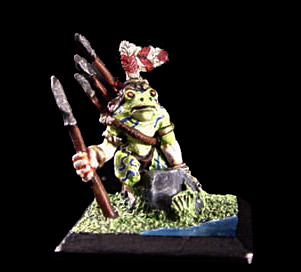 Supplement II: Blackmoor on Save or Die Podcast 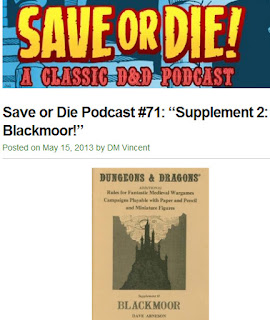 I was excited to learn that in the latest Save or Die Podcast they talk about Supplement II: Blackmoor! I was a bit surprised at how critical they are when they first approach the various sections of the booklet, though some of the criticism is fair and they do offer some good analsysis of the product. I do think they forget at times to compare this booklet to the standards of the time it was written although to be fair they do mention that at one point.


What I like about the SoD gang is that they have stated that they do not claim to be experts on gaming, but rather are honest about being average gamers talking about games. This causes me to forgive the mistakes in the podcast such as (Braunstein was created by Dave Wesely, Temple of the Frog was not written for Chainmail, Monks are in fact mentioned in the FFC etc). Although some additonal information about Blackmoor and Dave Arneson's work outside Supplement II would have improved the podcast, the group have at least read the Supplement and the FFC in advance and even make references to Jon Peterson's Playing The Game.


I was a bit worried early on because it sounded like they were going to make a big deal out of "who wrote what" in Supplement II, but although they do repeat that question several times, they thankfully avoid this done to death topic for the most part. I wonder if anyone could mention any other gaming product where the credited author has undergone as much scrutiny as Dave Arneson has had to suffer. I was relieved to learn that the podcasters at least distance themselves a bit from the most vehement attackers on Dave in this respect.

The biggest disservice in the podcast, I feel is the lack of appreciating for the Temple of the Frog adventure, which was the first published adventure for D&D ever, and arguably also contains the first setting material in any D&D product. The fact that it is structurally different from most adventures that followed it, still is a pretty awesome adventure. I am also a bit surprised at the rejection of the Monk and Assassin classes. Not that the classes do not have flaws in their excecution, but to me it seems like the podcasters disliked the concepts more than their actual class features. Given the success of the Assassin's Creed game series, you would at least think that the potential assassin class would be recognized?

Having said that, I did enjoy the SoD gang chatting about this historical roleplaying supplement. It is fun to listen to them talk about the various monsters, how the illustrations (although they do like them!) seem out of place, and the connection between Blackmoor and Mystara. One of my favorite bits is towards the end when the group apparently feel bad about how hashly they have judged the booklet, go on to express their respect for Dave Arneson.

If you, like me, enjoy listening to gamers talk about Blackmoor stuff, the podcast is worth listening to.