It has been all over the social media today: Supplement II Blackmoor for Original Edition Dungeons & Dragons (OD&D) has been made available for PDF sale on the DMsGuild.com website! Unlike the Greyhawk Supplement which appeared on the site yesterday, they have kept the original cover illustration for Supplement II rather than the revised art used in the 2013 reprint.

This is not the first Blackmoor PDF to be offered for sale from WotC though. DA2 Temple of the Frog has been out for quite a while. Now is the chance to get the original version of the Temple of the Frog it appeared in Supplement II back in 1975 though! You might need both of these modules if you hope to properly defeat D&D's first true Arch Villain, St. Stephen!

It would be nice if Blackmoor could be made to appear among the setting filters on the DMsGuild Website though. Even more frustrating is it that a search for "Blackmoor" does not give you DA2! I hope the fine folks at DMsGuild.com get both of those things sorted out as soon as possible.

As mentioned earlier on this blog, DaveCon 2022, a convention taking place on April 8.-11 2022 in Minneapolis Minnesota, was an event to c... 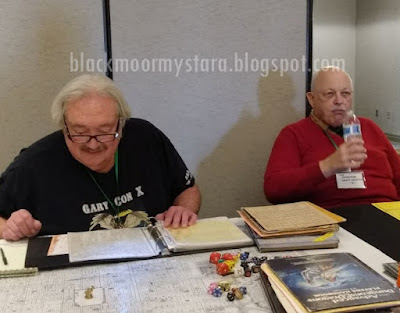