Former TSR author Bruce Heard is perhaps best known for his work on the world of Mystara, during the time when he was Product Manager for TSR's Classic D&D line. He is also the author of the Voyage of the Princess Ark series which ran in Dragon Magazine in the issues #153-188 as well as a final installment in #344.

Now, however, his own Fantasy Setting is about to become a reality. Featuring gorgeous maps by Thorfinn Tait, this world is now out on Kickstarter! I am a backer and I am really excited about this. Only up for 2 days, the project has almost reached its initial goal already and we have a good chance of seeing several stretch goals being met. Go over to the kickstarter page and join the fun now! 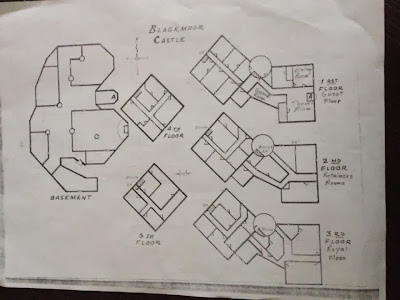 This map appeared today on the new Dave Arneson Facebook Page. The map was recently discovered by Dave's daughter. It appears to be a photocopy of of the map from the First Fantasy Campaign book (JG). However, a quick comparison reveals never before seen hand written notes identifying the purpose of several of the rooms.

Given where this map was discovered, it seems likely that these notes are from Arneson himself.


It would also be interesting to compare this map in greater detail to the floor plans of Castle Branzol which formed the inspiration for the original castle. In 2006 ZGG published Dungeons of Castle Blackmoor, but the book contained little information on the Castle itself. It has been speculated that both the Castle and the Dungeon could have been part of the never published DA5, of which there still may be a yet unrevealed manuscript out there.

In any case, this new map adds another piece to the puzzle that is Castle Blackmoor!