Dave Arneson Day 2015 Across the Web

Below are some comments posted on Facebook for Dave Arneson Game Day:


It's been such a long time since I last played Blackmoor... But it's like yesterday in my mind. Such a great time we had with friends. No matter how difficult it was for us to translate it from English, still we enjoyed it very much :D - Gilberto G, Italy I'm making something special.

I fell in love with Blackmoor and Dave's work when I read the four DA modules, many years ago. I was so mesmerized by them, their environment, their alien feeling, their characters and villains that most of them have influenced my way to be a Dungeon Master. So great is my passion for Blackmoor that I'm (the being) behind the fan page dedicated to the Egg of Coot that, in my imagination, remain and always will be, the real nemesi of Mystara and Blackmoor. Maybe someone could say that all this stuff is good only for Jurassic players like those of the old school..like me.. maybe.. I can only answer that, till the day that I'll have strength to thrown a dice and play this game.. well.. I will play the old, great, fantasy worlds like that imagined by Dave.


Whut. You know me. I am Rafe. Previously, the Last Fantasy Campaign. Now, Meleon: The Coward's Blade. I love Blackmoor.

Blackmoor has been my favorite campaign setting since I started playing back in the early 1980s. I played the MMRPG under 3.5 for quite a while and am now running a 4th ed campaign that started with the short lived 4th ed MMRPG and is now forging the history of Blackmoor in the year 1300. The PCs, having started at 1st level, are now all just about to hit 23rd level.

Well, I didn't get to play today but I did get to go to the wedding of two D&D buddies in the company of two other D&D buddies, so I guess that's something. Hopefully they'll never forget their anniversary!

Without Dave Arneson's Blackmoor, I never would have asked the question "Did Uther ever have kids?" I never would have filled in that blank myself and launched a writing project that has spanned nearly six years in the telling (with many, many more to come). One piece of that story is unfolding in the Throne of Stars campaign in the Thorn's World That Was sub-forum at the Comeback Inn: http://blackmoor.mystara.net/forums/viewforum.php?f=65
And yes, seats are still available if you'd like to play :D

My Thursday group IS presently playing D&D (Rules Cyclopedia version). Blackmoor even features in the campaign, (The game will continue through October, at which point we'll rotate GMs and game systems/campaigns again.) 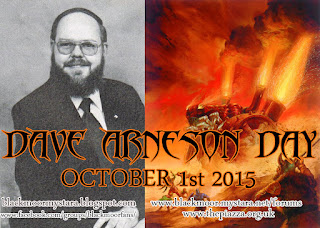 These are some places where Dave Arneson Game Day is being honored:

Also, introducing Blackmoor Week! Starting from today and one week onwards, many of the supporters of Dave Arneson Game Day will be posting Blackmoor and Dave Arneson related material on their websites every day. Join in the celebrations and show your love for gaming! :)

And here is an overview of Dave Arneson Game Day Events since 2010.