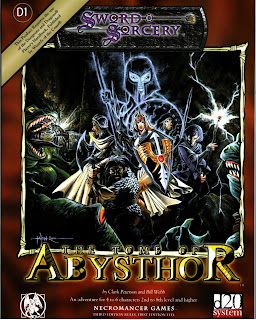 This 2002 module from Necromancer Games was brought to my attention recently. Apparently, Necromancer Games' President at the time Clark Peterson, had inserted references to Dave Arneson's most famous modules:


Writing under the pseudonym Orcus, Peterson goes on to express his satisfaction with the module, and also reveals his high opinion of the Temple of the Frog:

"...it has a cool homage to several really cool modules in it (Lost caverns of Tsojcanth and Temple of the Frog), it has links to Rappan Athuk for those who want them, it links to Crucible in that Tavik is there (if he survived), the new monsters are cool as are the new magic items.Can you tell I am proud of this one?" 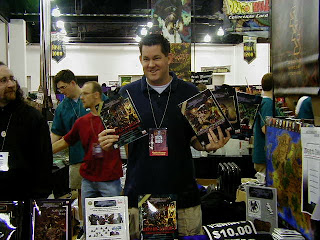 Yes Clark, we agree with you on this at least. Temple of the Frog is a really cool module! I don't have a copy of Tomb of Abysthor, but looking at some of the preview from DrivethruRPG, I came across the following excerpt from page 2 of the module, which may be the reference Peterson was talking about:

"The physical ruin of the shrines and burial halls in the Valley of the Shrines is by far the least of the corruption ofthe once-holy sanctuaries. In the great caves beneath the burial halls, the tsathar, inhuman priests of the foul god Tsathogga, long ago raised a temple to their hideous demon-frog god. The tsathar as a race are detailed in the Monster Appendix. More vile still, a contingent of priests of Orcus—the evil demon-god of the undead—recently came some ten years ago from the legendary dungeon of Rappan Athuk to corrupt the burial halls and exploit the location as a base of operations for further expansion of their evil cult. The followers of the two evil gods have reached an uneasy truce. Both, however, seek a power even darker still—the power of a legendary Black Monolithrumored to be hidden somewhere in these caverns, sealed away long ago by an ancient power"

So the Tomb of Abysthor was built by the followers of the Frog and the followers of Orcus. This would make the module ideal to place somewhere in the world of Dave Arneson's Blackmoor, right?

If any of my readers owns this module and have additional information from within the pages of the book, please let me know!

Update: More on this in my latest blog update

Email ThisBlogThis!Share to TwitterShare to FacebookShare to Pinterest
Labels: Clark Peterson, Temple of the Frog 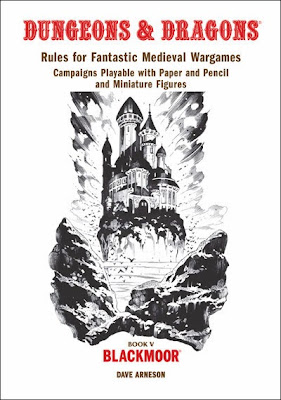 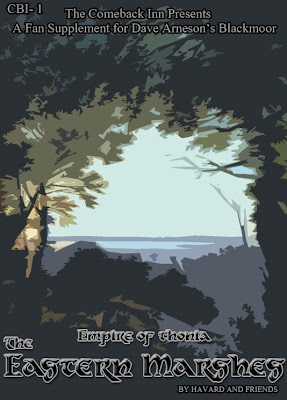 A new region in the world of Dave Arneson's Blackmoor is being explored in detail for the very first time. The Empire of Thonia, also known as the Great Kingdom, consists of ten provinces. The Eastern Marshes is one of the more traditional of the Thonian Provinces.