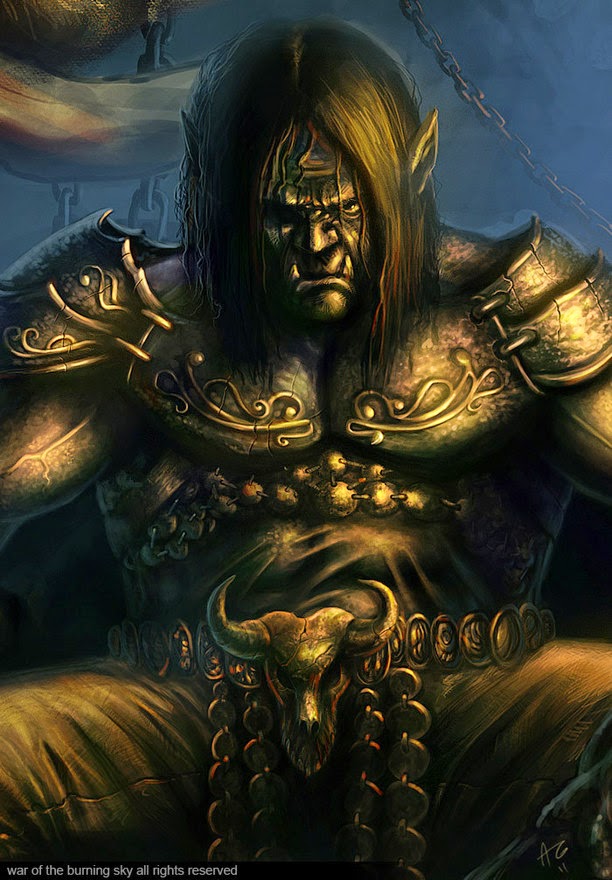 The realm of Blackmoor has many enemies. Four major Orc Tribes each control their own corner of the North. The rise of the Orcs followed the destruction of the Temple of Id. Although chaotic in nature, all Orcs follow a single king. King Funk III. Plotting the destruction of Uther's Realm from the depth of the 10th level of the dungeons below Blackmoor, the Orc King is an ally of the Egg of Coot. Although Blackmoor is an important enemy, the Orc King also displays particular hatred towards the race of Dwarves. Through their history, six wars have been fought between Orcs and Dwarves, the sixth is still ongoing.

Under King Funk's rule, the Orcs have greatly expanded on the Blackmoor Dungeon, creating the dangerous path called the Orcian Way. Unfortunately, the Orc population of the Dungeon has taken a heavy toll against adventurers from Blackmoor. One such hero who has caused severe annoyance to the Orcs is the Great Svenny who gained the name Orcsbane from his heroic battles in the dungeons. This has resulted in King Funk placing a a hefty ransom on Svenny's head, though none have yet to collect this reward.


In the original campaign, the Orc King was played by Frederick (Freddy) Funk who sadly passed away in 2011. As with many of his players, Dave allowed Freddy to bring his creativity to the world of Blackmoor. He expanded the dungeon with areas such as the Orcian Way where one could hear God Save the Queen played backwards. Freddy also created his own fantasy world known now as Fred's World sharing some traits with Blackmoor.


What is more formidable than an Orc King with ideas?


Before he went on to become Co-Designer of Dungeons & Dragons, Dave Arneson was a kid just like everyone else. This picture surfaced earlier this year via the now frozen Great Kingdom documentary project. Dave was born in Hennepin County, Minnesota on October 1st 1947. As a teenager in the 1960s he discovered board and war gaming with favorites such as Avalon Hill's Gettysburg.

In 1964 a gaming organization called the The Midwest Military Simulation Association (MMSA) was founded. Dave Arneson was a student at Park Sr High School in St Paul Minnesota at the time and joined the MMSA soon after it was founded. It was there that he met people such as Dave Wesely whose ideas would become incredibly influential on Dave's later views on gaming as well as many of the other original Blackmoor players.

It was the basement of his childhood home (seen in the picture above) that became the base of operations for the gaming events that would develop into the first fantasy roleplaying game. This is where one would find the bar counter that Dave used as what may have been the first DM's screen and the Ping Pong Table where much of the gaming took place.

When you went down the stairs to the basement of Dave's house there were doors to the right and to the left. The right hand door went to the laundry room (where we met the first black pudding on the first dungeon dive). The door to the left led to the room where we did most of the gaming. When you walked in to the room the bar was to your immediate right and the ping pong table (a pretty ordinary one) was on the left, with a couch against the wall on the far left.


Who would have guessed that an ordinary Minnesota kid with a fascination for board games would help change the world?

Further discussion of this article