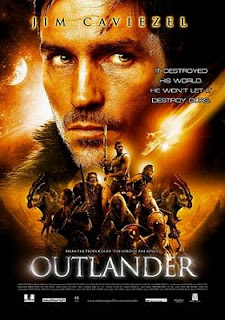 A Miniature of Dave Arneson 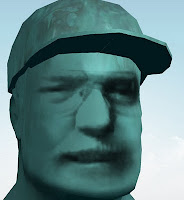 Some people get a statue in their honor. How should we best commemorate Dave Arneson? At the Maritime Mayhem event back in April, some of the attendees were discussing the matter with Dave's Daughter, Malia Arneson Weinhagen .

The idea of erecting a statue in Dave's memory might not have been something this modest man would have been comfortable with, Jeff Berry stated afterwards:

"we all agreed that if somebody had suggested this idea to Dave, he would have laughed his head off and very kindly told you that you needed to go soak your head in a bucket of water as your brain was obviously overheating; statues in the town square seemed silly to him. "

If not a statue, then what kind of a token could be made so that Arneson's many fans could remember him? Jeff continues:


I thought that running games for people to have fun with and at would be a more fitting tribute, and Malia [Arneson Weinhagen] agreed with me as she watched the mayhem and happiness unfold around the game table. We also talked about a Dave Arneson figure for people to have for games, and I'm going to see what I can do about that. Glasses, beard, and that Cheshire Cat grin; what more do you want in a wandering monster, eh?

A miniature then, in the shape of the game designer himself to be used on every gaming table? This is something I would love to get my hands on.

Code Monkey Press Forum is back up

But the Monkeys weren't dead. Code Monkey Publishing suffered some hard blows at the end of 2009, with both the Blackmoor lisence expiring, and the announcement that their cooperation with Zeitgeist Games was coming to an end in early 2010.

At this time, the CMP forum had been down even longer, since being attacked by hackers, apparently.

However, now the forum is back up and it looks like they have plans to get back to business as usual. It is unclear whether this will have any relevance for fans of Dave Arneson's Blackmoor, now that the lisence from WotC is ancient history, but it seems like CMP executive Robert Reed has not given up his plans for a New Lands Setting.

We are discussing this development in greater detail over at the Comeback Inn.

Over at the Comeback Inn, we have been discussing vapourware products for Dave Arneson's Blackmoor. That is, products which were planned, or even written, but never published. Most famous of these is DA5 City of Blackmoor. Supposedly, it was completed, but for various reasons never published back when TSR were doing the DA series.


Although we will probably never get to see DA5 City of Blackmoor, it can be intersting to speculate to what that product may have contained. We do know that it was written by David Ritchie as part of the DA series and that Ritchie used Arneson's notes as a basis.

Since Ritchie was working from Arneson's notes, it would make sense to look at items like the FFC which would have been available to Ritchie. As mentioned elsewhere, it is likely that the map of Blackmoor town from the FFC would have been included. Most likely this would have been expanded upon, with more information about the different buildings than what the FFC provides.

The next part from the FFC which might be useful is the description of Castle Blackmoor. The Castle itself is a wonderful opportunity for adventure and the FFC provides alot of information about the different parts of the castle and its inhabitants.

From the castle, the next step would be the dungeons themselves. Dungeons of Castle Blackmoor and the FFC might both include hints on what DA5 may have contained. Most likely, this would have been the main focus of the adventure. 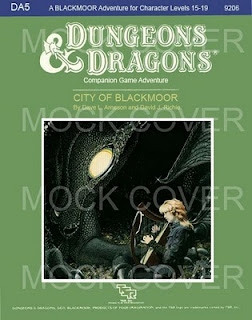 Finally, there is the metaplot. The entire DA series was written to allow PCs from the Known World to travel back in time and adventure in Blackmoor. It seems very likely that the same would be true for DA5. DA5 would also have to take into account that events of the previous DA modules, with the Afridhi having been defeated in DA4 etc. ZG's Dungeons of Castle Blackmoor has one big problem. The idea of a castle in the middle of Blackmoor, the royal residence, sitting on top of a 20 layered dungeon, home of demons and whatnot just does not make sense, does it? However, this was not so problematic in Arneson's own campaign. In his campaign, the forces of good were repeatedly driven out of Blackmoor town by the forces of the Egg of Coot. In this context, it made perfect sense to run a campaign where you were fighting to reclaim the city and the castle.

It is not unlikely that Ritchie would have deviced a similar storyline for DA5. Perhaps, after the Afridhi invasions, you would have a new invasion of the Egg's forces, lead by King Funk. This would basically repeat events from the original campaign, but allow the PCs to venture into the dungeons and defeat the Orc King once and for all. Leaving room to take the battle to the Realm of the Egg in a later DA module?