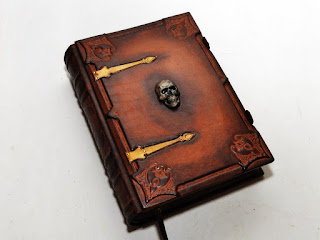 Greg Svenson's Lost Dungeon of Tonisborg: What Can The Maps Tell Us?

The Lost Dungeons of Tonisborg is an adventure with a history going back to the Blackmoor Campaign of the 1970s. It was created by Greg Svenson, player in Dave Arneson's campaign back in 1973/1974. Greg placed the adventure in Blackmoor and the city also appeared in Dave's campaign, although when the First Fantasy Campaign was published in 1977, Dave changed the name of the city to Vestfold, which was kept in later publications of Blackmoor. The origins of Vestfold and Tonisborg are discussed in more detail in this article. 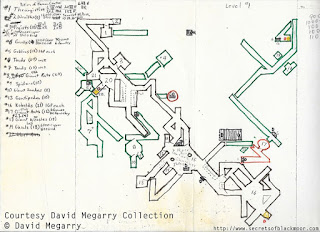 Greg's Dungeon Maps were thought lost forever untill a copy was rediscovered by another member of Dave Arneson's group, David Megarry, the designer of Dungeon! More details about the dungeon and its rediscovery can be read at Dan Bogg's blog here. A rewamped version of the dungeon is currently in the works to be published as a special stretch goal for the Secrets of Blackmoor Kickstarter. Recently many backers of the Kickstarter have joined the Comeback Inn Forum as the Secrets of Blackmoor creators have promised to share more details with Kickstarter backers there. 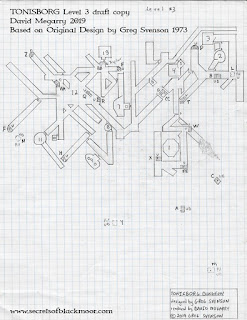 Recently, the Secrets of Blackmoor Facebook page shared Megarry's copies of the original dungeon maps for Dungeon Level 1 and Dungeon Level 3 of the Tonisborg Dungeon. It is interesting to see that this map shares certain features with Dave Arneson's dungeon maps that are less common in dungeon maps from later decades. We see the characteristic diagonal corridors, non-standard rooms and long corridors that seem to lead to no rooms.


"My hunch is that it is a consequence of Arneson drawing the roads and streams for table top battlefield maps for the Napoleonic Campaign. Outside of urban areas, roads and streams go any which way; it is only in cities and towns you end up with grid systems (though some older east coast towns road designs may have been drawn by drunken city planners, who knows?;) He did use graph paper to draw his maps but was not bound by those grid lines. If you look at the original Blackmoor town map, you can see that a tunnel from the town to Elf home or the Freehold would follow a diagonal line."


This theory certainly makes sense, and I do agree that Dave Arneson was probably thinking in terms of what was going on above ground much more than what later dungeon mappers would have been. From the FFC we know that his maps point towards where certain corridors would connect to other dungeons (like the Glendower dungeon connecting to the Blackmoor Dungeon) and other parts of Blackmoor.


Interestingly, this might also tell us how the designers of such maps (in this case Greg) imagined the surface world above the dungeon might have appeared. Upon Greg's suggestion, I placed Tonnisborg on the small island outside of Vestfold. Do I need to revise my city plan map now? :) 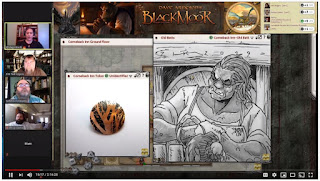