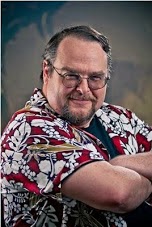 "[Blackmoor] was the cauldron of creativity where [Dave Arneson] fully distilled a game featuring individual characters as opposed to battling armies. Many of the features that would become Dungeons & Dragons began in the Blackmoor campaign."

You are reading the words of game designer Jeff Grubb, whose name should be known to any D&D fan. Jeff worked for over a decade at TSR and has continued to design RPG products since then.

As part of the A-Z 2014 Challenge, Jeff Grubb decided to write about Blackmoor for his second day entry on the letter B. I am also quite honored that he has included a link to my website, the Blackmoor Archives, for those interested in "a lot more backstory than I can give here". Thanks to my friend Big Mac at The Piazza for bringing this to my attention!

Quotes by Arneson, Gygax and Barker

Some nice quotes on gaming from the giants of RPG history.

More comments on this topic.