The Gazetteer Line and Blackmoor 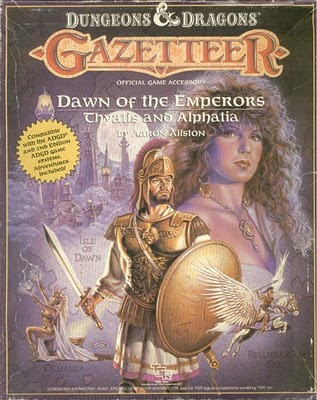 I was happy to see yesterday's Grognardia article feature the D&D Gazetteer line. Maliszewski speaks very well of these products, of which I was somewhat surprised given his general view of D&D products in this period, though I certainly agree on his judgement on this particular product line. I consider the Gazetteer Series the best line of setting material ever produced. Although the quality varies somewhat, the line has aged remarkably well.

I would like to direct your attention to the remarks made by Allen Varney in the comments section under the article and to which I completely agreee:

It would be appropriate here to praise Bruce Heard, TSR's ace Acquisitions Editor during the Known World's heyday. Bruce lavished attention on the Known World and the Gazetteer line as beloved children. You might also mention designer Aaron Allston, who did standout work on several Gazetteers and the Hollow World boxed set, as well as the massive D&D Rules Cyclopedia. More than a few fans still assert the Cyclopedia was the finest incarnation of the D&D/AD&D ruleset.


Looking at the list of other authors involved with the series there is a surprising number of names of people who later became legends of their own in the industry in addition to Heard and Allston. According to Bruce Heard, most of those who worked at TSR had a soft spot for the setting which later came to be known as Mystara.

DA1 Adventures in Blackmoor had been published in 1986 and the gazetteer line, beginning the very next year incorporated the background from the DA series into the history of the Known World. Blackmoor became a mythical prehistoric civilization that still had a significant impact on the setting described in the Gazetteer series. Gaz3 the Principalities of Glantri (by Bruce Heard) has several references to Blackmoor and even offers ways to connect the two settings through time travel. Gaz 7 The Brokenlands (also by Heard) also incorporated the legacy of Blackmoor's history into the setting. Gaz 13 the Shadowelves (by Carl Sergeant and Gary Thomas) featured among other things, Rafiel, an Immortal who could still remember Blackmooor. Most of the other Gazetteers also have some references to Blackmoor. The Gazetteer series did among other things helped keep the knowledge of Blackmoor alive among D&D gamers.


As Arneson's original D&D campaign, Blackmoor was already becoming legendary. In the Gazetteer line, Blackmoor became a sort of mythical land within the fantasy setting as well; a place from which everything originated.