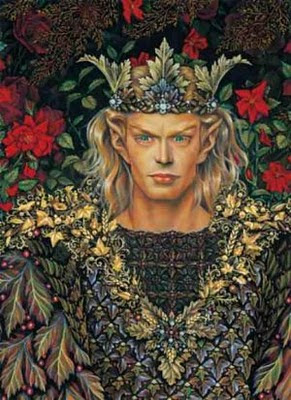 Elves believe that they were created by Ordana, thousands of years ago. In the early days, they lived in a paradise-like state, protected by the spirits of the forest. As the elves began exploring the world outside the woods, they encountered other races. Only the Fey Lords still maintained the relationship with the forest spirits that all elves had at one time enjoyed. At the time when the first Thonians settled in the North, King Uhlmar was the ruler of the Northern Elves. King Uhlmar sought to befriend the Thonians and for centuries the two races prospered from this good relationship.

INNOCENCE LOST
It was at this time that a great evil rose in the North. A dark cult, worshipping the deity known as Thanatos, threatened both the Thonian and Elven way of life. This dark army had constructed a stronghold upon the site where the God Temrin was said to have been murdered. The Stronghold was known as the Temple of Id.

King Uhlmar had seen many Thonian Kings be born and die since he first encountered this race. He now proposed an alliance of Elves and Thonians against the Cult of Id. The elf Aquassiru, who was Uhlmar’s friend and General of the elven armies warned the king. Thonian attitudes had changed and the current ruler was not as honorable as his predecessors. However, Uhlmar was confident that the humans would do their part. However as the elven army marched on the forces of Id, the Thonians pulled out, leaving the Elves to fend for themselves. General Aquassiru realized that his worst fears had come true. He had to make a hard choice. Drawing his sword, he bravely charged the enemy, demonstrating such courage that all his elven warriors were inspired. The elves came out victorious and the Temple of Id was destroyed. The enemy was defeated, but the victory had taken its toll on the elves. Many elves were dead. General Aquassiru had suffered a fatal wound. Upon his death bed, the General asked that his soul was to be transferred into his sword, so that he might serve future generations of elves as an advisor. The sword would be known as Tel’Aquassiru, or Feyhold.

DECLINE OF THE ELVES
The aging king, Uhlmar, was gravely saddened by the loss of his friend. Many elves now turned against the king, blaming Uhlmar for putting too much trust in the humans. The king was even more deeply hurt to learn that the leader of these elves was his own daughter, Princess Ceridrone. The princess declared herself ruler of the elves of the west. Her followers called themselves the Westryn and wowed never to trust humans again. Uhlmar was dying of extreme old age. As a young prince, he had been one of the elves to first venture outside the forests. At the end of his reign, he was now seeing the decline of the elven race. On his death bed he cursed his daughter and the elves of Westryn, a curse that would lay on this race until this day.

King Uhlmar’s successor was his son, Noris Ithamis, whose wife had recently given birth to their young son, Menander. King Noris became the leader of those elves who had remained loyal to Uhlmar, from now on known as the Cumasti. King Noris did not however, wear the True Crown of the Elves, as it had been lost with Uhlmar. It has been said that this Crown might hold the secrets of restoring the elven race, but many young elves dismiss this as a mere legend.

Ceridrone, now known only as the Black Queen of the Westryn was the ruler of a Cursed Race. She let dark things crawl into her withering forest realm, losing all care for life. Spirits of the dead began to haunt her halls. Today the paths to the City of the Black Queen are all but forgotten.