Aquaria is the name of BECMI D&D author, Frank Mentzer's, home campaign. For a while now, Frank has been talking about getting his setting published. Unfortunately, family affairs kept him busy over most of last year, but recent posts at Dragonsfoot and the Piazza have shown that he has not given up on this idea.

Recently, the Piazza in particular has seen alot of interest in the Aquaria setting, and rumours have it that the first ever Aquaria forum will be created at the Piazza in the near future. With the Piazza community getting interested in Aquaria, we are seeing alot of interesting discussions and creative input. Dave L is already in the process of making maps for the setting based on Thorf's hexes. This has all been done with Mr Mentzer's blessing. 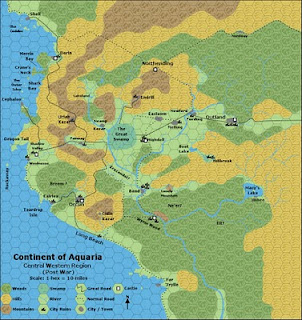 Aquaria is of particular interest to me because of Frank's role in it ofcourse, but also the fact that he uses the cosmology he created for the BECMI system with his setting, including Immortals, 5 dimensional spaces, Dimensions etc. Like Blackmoor, Aquaria is nominally located within the Greyhawk Setting, though if it is published, it will probably be presented as an independent setting. This should be relatively unproblematic as the Greyhawk connection has perhaps not had such a strong impact on the Aquaria campaign in actual play.


Frank recieved alot of unfair criticism in the Blogosphere when he last made an annoucement on this subject, so I am hoping the sceptics will wait and see this time around, rather than attack something which might turn out to be the next really good thing for fans of Old School D&D and younger gamers alike.

A list of existing products tied to the Aquaria Campaign can be found here.