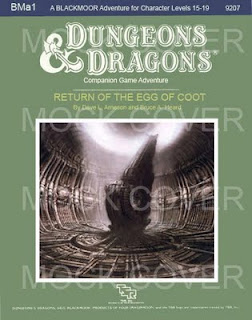 The Egg of Coot is perhaps the most infamous of Blackmoor’s enemies. Dave Arneson describes the Egg, humorously in the First Fantasy Campaign.

The following is my own interpretation of what the Egg:

Nature of the Egg
The Origins of the Egg of Coot are a mystery. Some scholars believe that it is one of the remaining servitors of the Outer Beings. In the Age of Blackmoor, these servitors are referred to as Elder Demons, and once dominated the entire continent. The Egg appears as a huge globe of mossy gray flesh and eyeballs and mouths randomly scattered across the slimy surface. The Egg is buried deep under ground and almost never moves. Tunnels beneath the fortress known as the Egg’s Nest lead to the Chamber of the Egg which its most trusted servants use to contact their master. The Egg is the definition of Evil. It is highly intelligent and communicates with its fanatical followers through Telepathy.

The Egg has powerful magical powers. It is also a master of technomancy, but the technomancy used by the Egg is a different form of the art than what is practised at the University of Blackmoor. Fusing technology and necromancy allows the egg to created technologically enhanced zombies. Its highest ranking servants are technomantic Liches.

The Egg is also able to produce magical items including:

Juggernaut of Doom
This powerful War Machine is similar to regular Juggernauts and may travel through forested areas without any movement penalty due to huge cutting blades constantly swinging along its sides. Anyone approaching the juggernaut from the sides must save vs Dragon Breath or suffer 3d8 points of damage. The Juggernaut of Doom may carry up to 50 humanoids.

Wraith Blade
These wicked Bastard Swords are enchanted with the Vampiric Regeneration ability (the wielder heals Hit Points equal do damage dealt) which is usable once per day. However, points regenerated this way must be recorded. Once the total number of HP recovered from usage of this ability, the wielder becomes a Wraith himself.

Wraith Crossbow
These heavy Crossbows may fire once per round due to Repeting technology and magic. Long tubes reach from the Crossbow to the bolt quiver.

Wraith Mantle
These technomagical heavy mantles have the Etherealness ability similar to the potion of the same effect.

Potion of Poison
As the magical item of the same name.

Motivation
The goals of the Egg are difficult to grasp for mere mortal minds, but sages have some theories:

The Egg is Evil in a cosmological sense. It is the ultimate manifestation of selfishness at the expense of others and as such sees Blackmoor, a force of good, as a threat to its philosophy. Unlike the Afridhi, the Egg is not Chaotic, but perhaps closer to Lawful Evil, trying to force everyone and everything into submitting to its will. This is why someone like Marfeldt the Barbarian is willing to aid Blackmoor in the struggle against the Egg. It is also possible that the Egg through some precognition has recognized Blackmoor as a possible threat to its existance.

The Realm of the Egg
The Realm of the Egg is a place filled with sinister disorienting mists. Large towering structures can be seen surrounded by smaller ruined and abandoned buildings. Cities and towns appear desolate, although there are creatures lurking in the shadows. The land was raised from the sea and some of the structures seen were originally built by Merfolk

The Egg’s Nest is an impenetrable fortress. Colossal rocks enforced by rusting steel bars and huge iron doors are some of the most prominent features of the Nest. Going deeper underground, the halls are a mixture of metal rails, cold rock, mushy swamp like growths covering some of the walls and slime dripping from the ceilings.

Thralls of Coot
The Egg’s servants are known as the Thralls of Coot. They are fitted with a symbiote which make them completely under the control of the Egg. Under certain circumstances, the true nature of the Thralls can be seen. The Thralls get a bluish glow to their eyes and their faces become twisted. These features can be hidden, but become stronger when the Thralls are within the Realm of the Egg. The Champion of the Egg, known as Moorcock the Slayer is the ultimate Thrall of Coot. He was originally a Skandaharian Warrior, but now he has fallen under the control of the Egg. The loss of one of their greatest warriors has created enmity between the Skandarians and the Egg. The Ran of Ah’ Foo is another of the Egg’s creations, but one who betrayed its master and left for the Duchy of Ten. It is possible that the Egg

The Spawn of Coot
The Egg is able to create miniature versions of itself known as Spawn of Coot. The Spawn is intimately tied to the Egg, and there is a telepathic bond between the Egg and the Spawn. At the early stages of the Spawn, the link extends to life force as well, so damaging the Egg will also hurt its spawn. Most likely this bond will be broken when the Spawn grows to a sufficient size. There are rumours that that the followers of Coot were preparing for the seeds of the Egg of Coot to be spread throughout the world.

Thanks to Rafael and others for suggestions and input on this one.

Email ThisBlogThis!Share to TwitterShare to FacebookShare to Pinterest
Labels: Beagle, Egg of Coot, Moorkok, Ran, Valley of the Ancients

As I reported a few days ago, Drivetrhu RPG is now offering some of the old WotC owned TSR modules of the DA series as Print on Demand prod... 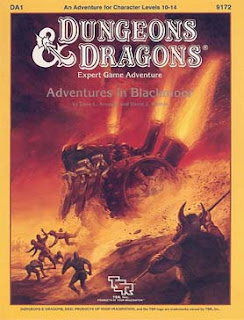