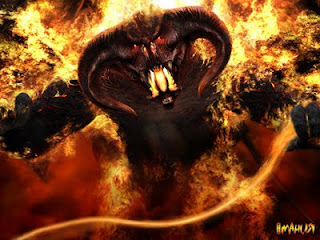 Evil is very much present in the North. Adventurers exploring the darker places of the region risk encountering the darkest of evils, the Demons of the Fiery Pyts (Hell). Demons cannot normally exist on the Prime Plane unless summoned by mortals so it is surprising that so many of these darkest of creatures exist in the North. Many of these demons were called to Blackmoor in during the Mage Wars (Year 815-896). With the intensity of the battles between the spellcasters of the north, many desperate mages sought any means to ensure their victory in this bitter conflict. Ancient scrolls detailing the secrets of demonology were brought out from dusty vaults and once again put into practise. Some such pacts involved humans breeding with the infernal creatures, giving birth to children with demonic blood in their veins. The Mage Wars were not the first time demons were seen in the North however. In the deepest underground lairs and in the darkest forests, creatures exist that have been living their since before the men of Thonia began exploring these lands. Some believe these creatures are older than the race of Men itself. The Wizards Cabal has worked hard to purge the North of demonologists. Many practitioners of such arts have been executed over the last decades and many forbidden scrolls and tomes have been burned. Still, there are masters of demonology out there, summoning demons and using them to undermine the powers of law and good in Blackmoor.

Demons in Dave Arneson’s Campaign
There are several accounts of demons from Dave Arneson’s own campaign. Back then, the only type of demon existing was the Balrog, so that is the term most often used. In the encounter tables from the First Fantasy Campaign, there is a 5% chance to encounter Balrogs in desert or mountainous terrains. In Rob Kuntz’ account of Robilar’s Journey to the City of the Gods, Robilar’s meeting with a Balor is described; a battle which almost cost Robilar his life:

“Suddenly, the light grew, like an approaching lantern in the dark of night. But then it expanded to fantastic proportions; at the same moment there issued a scream from
inside which sent fear into him. The light had become a blazing fire, with smoke issuing before it and pouring out of the aperture and onto the ledge. Robilar stepped back as a
flaming figure taller than himself leapt onto the ledge. In one hand it held a flaming sword; in the other a whip dangled, curling back and forth by the ministrations of the creature's
ever-flexing wrist.

Robilar faced one of the most feared enemies of legend, and one he had never chanced to combat in the past: a Balor. Its wings spread high and wide and then its baleful eyes pierced him. Robilar winced, avoiding those eyes. He gripped his sword, awaiting the demon's rush. Its flames, even from the odd distance of ten feet between them, was painful to endure. Robilar thought of Mordenkainen. He did have a levitation spell...

The Balor leapt. It was an incredible feat, for it adjusted for Robilar's dodge by using its wings to glide. The fighter swung at empty air. The creature landed upon the metal ledge with a sharp thud. Robilar wheeled left, attempting to flank it. There was a cracking sound. Robilar thought of ducking, but the thought came too late. He felt a tug and he moved involuntarily. His sword arm was wrapped in the whip and he was being dragged towards the demon!
As Robilar struggled with the creature he thought of every wrestling match he'd won, from Greyhawk City to Narwell, to the courts of Ivid the Mad himself. But this was an inhuman strength he'd never encountered, and even his girdle didn't seem to matter. Robilar was pulled closer until the smoke and flames were about him. He screamed, and wrenched at the whip. A
sword cut through the smoke, barely missing his head. He had felt it pass--and too close. He let go of his own sword, heard it clang to the ledge as he took firmer hold of the whip. This
steadied him for a second, but there was that damn flame again. It seemed to be feeding on him, growing more powerful as he remained in it. He grew faint, numb; and he barely felt his hands blistering while noting the distinct smell of burning leather--hisgauntlets. His eyes swelled shut and he gasped as the flame heated his armor, branding his body.

He was roasting! The accursed thing was roasting him! Robilar desperately tugged at the whip. He could feel it give a little; but his grasp was slipping fast. His knew that his hands were charred; and he mentally fought to hold on--to tug. Robilar arched his back and planted his feet. He tugged upwards with all his might. He screamed as he did so. The whip broke with a loud snap. Robilar tumbled backwards andfell from the ledge, cutting through the cool air like a stone. Unable to concentrate on bringing his boots to work, he plummeted toward the street below. Toward death”
-Rob J Kuntz, Oerth Journal #6

The term Balor is used here, since the term Balrog was removed along with the other Tolkien terminology in all but the earliest versions of D&D. Things looked fairly bleak for Robilar, but he was saved by Mordenkeinen, played by none other than Gary Gygax:

“Mordenkainen had been preoccupied with searching for secret doors for some time after Robilar ascended. Failing to find any, he had returned to his vigil of watching above. Minutes after Robilar had landed on the ledge, he had seen the smoke, then the flame. He was in the process of casting his levitation spell when a body appeared and fell
groundward.

Mordenkainen adjusted the verbalization in time and cast the spell upon the body: it slowed but did not stop. It was all Mordenkainen could do to control the spell effect, bringing the body of his companion, who he now recognized, to a less than perfectlanding on the pavement below, where it tumbled and rolled for a few seconds afterwards. Mordenkainen approached a dazed and burnt fighter. He shook his head in dismay.”
-Rob J Kuntz, Oerth Journal #6

Original Blackmoor Player John Soukup played a Balrog in Arneson’s first campaign (although Arneson has later denied that he was a Balrog, just a powerful evil character, see below) Soukup’s Balrog appeared in the first Blackmoor game Greg Svenson ever played in. The Balrog, working for the Egg of Coot, had been terrorizing Baron Fant and the Baron had sent handpicked men, including the then inexperienced Svenny after the enemies. The entire army was killed, leaving only Svenny (barely alive) to be mocked by the Balrog. (http://blackmoor.mystara.us/greg01.html) It has been speculated that this is the same Balrog who later fought Robilar in the City of the Gods. Soukup’s Balrog also joined forces with the Great Svenny against Funk’s Orcs in the Blackmoor Dungeon:

“The Soukup brothers were actually players in the original campaign. Dave said they "were just one of the first bad guys." John Soukup played the balrog in the first adventure into Blackmoor dungeon and, again as the balrog, joined the good guys in an attack on Fred Funk's orc tribe on the 10th level of Blackmoor dungeon later in the campaign, his balrog character died on that adventure and the Great Svenny had to be dragged out by his companions (down to 0 hp). These are the two adventures I have the clearest memories of from among the 100's (?) I participated in in the early days.”
– Greg Svenson

It is interesting to note that Soukup Balrog joined forces with Svenny. Is this an indication that not all demons of Blackmoor are evil, or simply another example of evil turning upon itself?