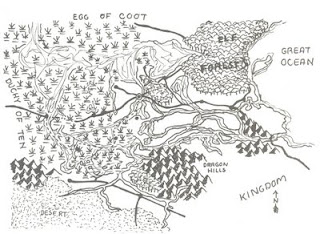 A few days ago, I asked the wise folks over at the Original D&D Discussion Forum about the origins of the Blackmoor map. Two rumours have been circulating about the maps as told by Finarvyn:

1. Both Blackmoor and Greyhawk campaigns were tied to the old C&C Society kingdoms map. (This certainly fits the Greyhawk=Chicago model that Gary has stated but, since the original Blackmoor campaign was not directly linked to the original Greyhawk campaign, it doesn't really explain Blackmoor's coastline. Also, I can't recall if Dave has ever made this claim, or if it was a Gary-only thing.)

2. Blackmoor was based on Dutch maps, only possibly inverted or reversed or somehow in a way that makes them hard to identify. (I've spent a lot of time looking at Dutch coastlines and haven't been able to match anything up close enough to match Dave's maps. However, since this is Dave's version of the story I'm inclined to put a lot of faith into it.)


Now, it didnt take long for replies to my query. James Mishler posted this excellent article on the connection between the Dutch maps and the original Blackmoor map.

I am still not convinced that the C&C Society maps are irrelevant to the shape Blackmoor took, but James certainly convinced me of the connections to the Dutch maps. His blog article is a real gem!