DUCHY OF THE PEAKS - PART II 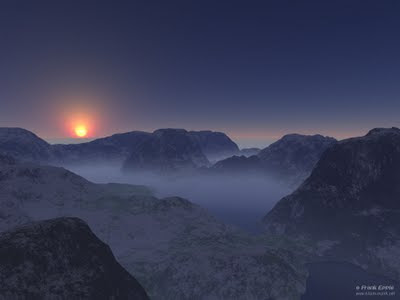 Much later, around the year 700, they were joined by a people called the Unwanted. These were dissidents fleeing persecution in the Thonian Empire. The Duchy offered to protect these people, but in the end the majority were turned into slaves. Many of these slaves were used to construct a line of forts along Thunder River.

Men from the Duchy of the Peaks made contact with the Realm of the Egg of Coot later that same year. The Duchy attempted to play the Egg, the Duchy of Ten, Thonia and the Peshwa against eachother and has seemed to successfully avoid getting drawn actively into conflict itself. They rely on bribes, shifting alliances and clever diplomacy to stay out of war and make a profit instead.

In 985, Marfeldt the Barbarian arrived in the Duchy. His visit would prove disastrous to the realm. Disgusted by its culture, the Barbarian went on a rampage which reputedly significantly reduced the population of the realm.

The former Duke, known to some as Lord Whitehead was perhaps not the most clever man, though he was said to have lead men into battle personally, even though he mostly tried to keep his realm out of wars. At an old age, he married the exotic dancer named Sonia Sholako, who through the use of her charm and magic was able to manipulate the Duke into handing over the realm to her. She has remained the ruler of the Duchy since the death of the former Duke.

Unfortunately, the Afridhi invasion and recent wars has been problematic for the Duchy as the markets for their gemstones has dried up. The Duchess has been forced into an agreement supplying the Afridhi with Pikemen from the Peaks, though she has seemed reluctant to follow up on the arrangement. The economic troubles the Duchy has had, in recent years, have made the barons push their vassals and slaves harder, making the country ripe for revolt.

Email ThisBlogThis!Share to TwitterShare to FacebookShare to Pinterest
Labels: Duchy of Ten, Duchy of the Peaks, Egg of Coot, history, Marfeldt