THE BIRTH OF BLACKMOOR

Blackmoor was created by Dave Arneson in 1970. He developed his own rules for the game, which gradually grew more advanced, before showing it to Gary Gygax, who had been working with similar ideas, in 1971. 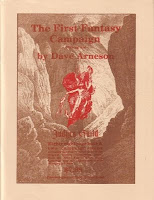 The two of them went on to create Dungeons & Dragons which eventually was published in 1974.

It must have been fascinating to take part in the early Blackmoor games. Today it is difficult to imagine a world where the phenomenon of roleplaying games doesn't exist. Although most experienced gamers can perhaps recall the wonders of our own first introductions to the game. I imagine being part of the birth of the hobby must have been a bit like that, only even more amazing.


Original Blackmoor player Greg Svenson describes his introduction to the game like this:

During the Christmas break of 1970-71; our gaming group was meeting in Dave Arneson's basement in St. Paul, Minnesota. We had been playing a big Napoleonics miniatures campaign, which was getting bogged down in long drawn out miniatures battles. So, as a diversion for the group, one weekend Dave set up Blackmoor instead of Napoleonics on his ping pong table. The rules we used were based on "Chainmail", which is a set of medieval miniature rules with a fantasy supplement allowing for magic and various beings found in the "Lord of the Rings". I had never played any games like it before, although I had read "Lord of the Rings". Other members of the group had played the game before, but always doing adventures in and around the town of Blackmoor. By the end of the weekend I had fallen in love with the game.
-The first Dungeon Adventure, Greg Svenson


The most extensive documentation fromthose early days is the First Fantasy Campaign (FCC). This book, published in 1977 by Judges Guild, can best be described as a collection of notes, sketches and house rules from Arneson's campaign. To Blackmoor diehards, it is a gold mine of ideas and insight into the mind of a genius. Although many of Arneson's ideas have been published and revised in later products, there are still hundreds of elements in the FCC that are still waiting to be discovered.