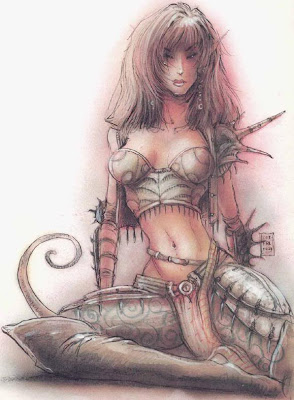 One of the most controversial elements in the 4E First Campaign Sourcebook for Blackmoor was the inclusion of Dragonborn, Eladrin and Tieflings. These races have never previously been mentioned in any Blackmoor product and were certainly never used in Dave’s campaigns.

Tieflings were created by David “Zeb” Cook and given their name by Wolfgang Baur and first appeared in the Planescape Monstrous Compendium Appendix in 1994. In the 4th edition they became one of the core PC races and were redefined as a separate race “whose human
ancestors made a bargain with devils to increase their power.” (http://en.wikipedia.org/wiki/Tiefling)

In the First Campaign (4E) Sourcebook it is stated that the first record of Tieflings dates back a century or so, but that they have become more numerous over the last 30 years. While it isn’t specifically stated, connecting the appearance of Tieflings to the mage wars seems likely.
While Tieflings have never been mentioned in older Blackmoor products, demons certainly belong in the setting. The great presence of demons in Blackmoor’s history does perhaps not make human demon alliances of various sorts unlikely?