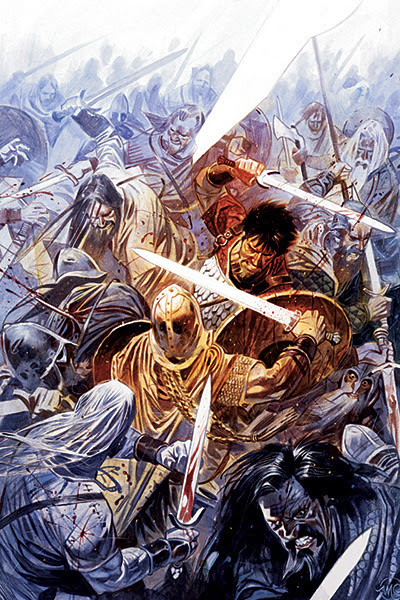 So, during one of those days, while I had to wait for the van to take my furniture out of my old flat, I did a short of visit to my FLGS, “Hermkes Romanboutique”. (Yeah, that’s what one calls viral marketing!)

Among other treasures I found there, I literally ran into a comic book that instantly captivated my attention, not only as a Blackmoor aficionado, but also as a fan of comic books in general:

“Northlanders”, written by Brian Wood, and published by Vertigo comics, is certainly one of the better indie series I have in recent years: Narrating pseudo-historical stand-alone episodes from the British Dane Law era, the comic manages to stay captivating, intelligent, and artistically pleasing in its minimalism all through the two trade paperbacks ( a third one being due in March of this year).

The first one, “Northlanders: Sven the Returned” is my favorite, telling a byronesque tale of revenge about a lost son returning home to the Orkney Islands and declaring war on those who have wronged his family. – The most intriguing comic book tale with a medieval/fantasy background I have read in years, and I am talking “really long ago”, like, since the publication of the Japanese “Lady of Pharis” in Germany.

Of course, the book has the usual Vertigo weaknesses: In-your-face action, too much sexual innuendo, and some lesser logical flaws concerning the plot. However, as it comes, Brian Wood’s story is convincing, and the artwork provided by Davide Gianfelice is extraordinarily well suited. Of special interest, and good for a few smirks is he fact that the storyteller and hero, Sven, is not only the typical Vertigo badass, but also a very unreliable narrator when it comes to moments where he could look bad.

In sum, a very good comic book, and already a favourite of mine. As to medieval action and suspense, an example of how things should be done.


The second TPB installment of the series “Northlanders: The Cross + Hammer”, unrelated to the first story arc, and telling the story of a solitary rebel against the Viking attacks on Ireland, didn’t convince me as much as “Sven the Returned” did, though it’s still a solid read; the problem is that Wood overdoes the perspective of the unreliable narrator to a point where I personally had problems following the story. Also, I personally dislike totally grim tales; the comic would have done better showing some of the narrative balance the “Sven” arc had displayed. However, that might be just a matter of my own personal taste.

So, what connection do I draw between “Northlanders” and “Blackmoor”? - Well, the visuals, of course!

In contrast to the manga-like, over-the-top illustrations 4e and Pathfinder provide the fans with, Gianfelice’s, and in the second arc, Ryan Kelly’s art is almost exactly how envision my own personal world of Blackmoor: Simple clothing, Dark Age weaponry, sumblime sceneries and hostile weather.

In addition, I like low-paced stories; nothing big and spectacular, just slow and dark, naturalistic action. Scenes, that when made to a movie, maybe would be filmed without a musical score.

For my personal taste, a reader’s pleasure, almost all the way through.