[Characters] The Wizard of the Wood 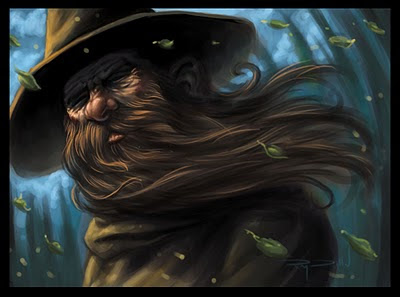 Legendary Characters is going to be a returning feature in this blog. One of the striking features of Dave Arneson's Blackmoor is its characters. The fact that so many of the NPCs were at one point PCs gives them a certain depth that would be more difficult to achive had they simply been designed by an author. We have earlier taken a look at the Great Svenny. Today's Legendary Character is the Wizard of the Wood. Greg Svenson provided the following:

"Pete Gaylord played the original Wizard of the Wood. The 'Wood' was a forest area just east of the city of Blackmoor where the wizard resided. He was the first wizard/magic user."

After settling in the woods east of Blackmoor, the Wizard befriended many woodland creatures. He was able to raise a considerable force of Pixies. Ents and other sylvan creatures may also have been among his allies. The Wizard of the Wood has also been known to befriend dragons. The serene woodlands where the wizard had his homely hut built was protected by the dragon Tuffy, named after Gaylord's cat. In Garbage Pits of Despair, we learn of "Sophie", another of the Wizard's dragons. Sophie makes her home in the Dragon Hills. The Wizard befriended the Sophie when she was still quite young (20 years old), but used his magic to increase her age to over 300 years.
The greatest moment of the Wizard may have been during the Great Invasion, where the Egg of Coot attacked Vestfold (most likely in 994). The Wizard of the Wood joined with other forces of good, commanding a force of Pixies. The fate of the Wizard is unknown, but at some point he disappeared.  After this, the Woods which had been his home grew into a sinister place. So they remained untill the Thonian Year 1001 when a wizard named Sildonis cleared out the woods and claimed the title Wizard of the Wood for himself.
I have always been fascinated by the Wizard of the Wood. I think it was the reference in David Ross' Blackmoor Timeline that first drew my attention to this character. I always imagined there would have to be something to this title "Wizard of the Wood". Does the title imply fealty from the nearby Sylvan creatures? Does becoming "the new Wizard of the Wood" provide you druidic powers? In a campaign, I would be tempted to make Sildonis disappear or leave his post (he seems bored with it) so that someone else (a PC?) can claim the title...