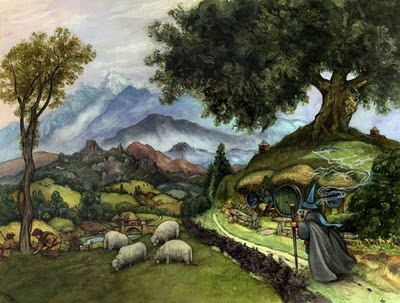 Seeing as today would have been Prof. Tolkien's 118th birthday, I decided to take a new look at the Professor's influence on early Blackmoor. As with most of D&D, Blackmoor was originally filled with Hobbits, Ents, Orcs, Balrogs and even references to Saruman, Sauron and Mordor! Ofcourse, these were removed from later printings of D&D, and were also dropped when Blackmoor returned to TSR with the DA series.

Arneson relied heavily on Chainmail when populating his setting and many of the Tolkien references were brought over from there. Greg Svenson confirms that


"Tolkien was a major influence, otherwise the primary races would not have included elves, dwarfs, hobbits, orcs and goblins; but, at the same time [...] there were many 'major' influences on our games. We all read lots of Sci Fi and Fantasy. Remember there was no cable TV or VHS and DVD players for entertainment in those days..."


While TSR were not able to use Tolkien's trademarks in their later published works, there is no reason that fans should feel bound by this. So let that be our present for Tolkien! Lets bring back the Balrogs, Hobbits and Ents to our games, in honor of the Professor who affected our lives in so many ways.