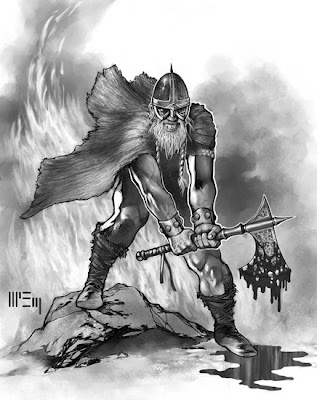 Reader 1d30 asked about this character some time ago. I figured it was time to elaborate some more. This is the fourth installment of the Realm of the Egg.

Skandaharians, warriors of the north. Not just your run of the mill noble seafaring norsemen. No these are blood-thirsty, human sacrificing killing machines. Strength and raw brutality is the way to earn respect among this people. They are feared warriors, but none were as feared as Moorkok the Slayer.

While most of his kin are gray or blue eyed with hair ranging from dark to light blonde, Moorkok would stand out with his reddish hair and sparkling green eyes. These features betrayed a foreign origin, but no Skandaharian dared speak ill of his parentage. Or those that did do not live to tell the tale. Rumors circulate even today though that demonic blood runs through his veins. Other say he stems from the mysterious realm of Rhun. The Warrior is tall and powerfully built. In battle, he wears metal armor and a deadly mace. He rides a white war horse.

Through battle, Moorkok rose in the ranks of the Skandaharians, until he became one of the champions to join the Hirdr; Jarl Thorsen’s personal guard.

In the Year 998, the Northern Lords fully understood the threat that was known as the Egg of Coot. They decided to join with the Baron of Blackmoor. Moorkok personally led an attack against the Coot stronghold of Trollgate. Something happened there at Trollgate. The Skandaharian army was wiped out. Their leader was not slain however. In the midst of battle, he heard a voice calling his name. As if entranced, he abandoned his men and left the battlefield.

Since that day, Moorkok has served the Egg. He has done this so successfully, that the Egg has named him Prince of the Realm and has decided that Moorkok will be the one to lead the next invasion against Blackmoor. This is the day Moorkok waits for. He also hopes to get a chance to test his mettle against Marfeldt the Barbarian, the only one he considers an equal.

(More information about Moorkok may be found in DA1. Much of the above are my own inventions. Some additional information and discussion about this character can be found here.)