There's a Spaceship in my Fantasy? 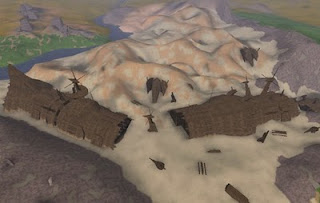 With all the recent talk about Traveller on Sandbox of Doom , Grognardia and other blogs this month, I return to the topic of Science Fantasy in Blackmoor.

DA3 revealed the secret of the Valley of the Ancients. A crashed space ship right there in Dave Arneson's fantasy setting! By the time that DA3 was published, this was hardly new though. Gary Gygax' S3 Expedition to the Barrier Peaks had been published in 1980, likely inspired at least in part by Gary Gygax' own experiences as a player exploring the City of the Gods in Arneson's game. Much later the concept of a crashed space ship in a D&D setting would return in Tales of the Comet. 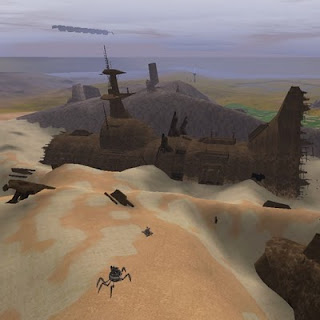 DA3 was not the first appearance of a space ship in Arneson's game however. It is not unlikely that it all began with a board game called Star Empires.  In 2008, Dave Arneson reported:


John [Snider], the author, was another of the original [Blackmoor] group. He had outlined a whole series of books and maps.

My recollection is that it was a crossover from our parallel "Star Empires" campaign that John Snider was running (from early 1973 to late 1974 or so, when John went into the Army). There was an RPG component to "Star Empires" which we were also playing, but TSR never published it. We had several encounters with scout ships from the neighboring galactic empires before the world Blackmoor is on was quarantined by the local galactic government, I can't remember which empire controlled it.

The spaceship from DA3 was the FSS Beagle, an exploratory vessel of the Galactic Federation, commanded by Captain Bork Riesling. DA3 revealed that St. Stephen of the Temple of the Frog hailed from this vessel, answering a question that had been asked since the publication of D&D Supplement II, where St. Stephen had first made his appearace to the common D&D fan. In Supplement II, his origins had simply been explained like this:

This fellow is not from the world of Blackmoor at all, but rather he is an intelligent humanoid from another world/dimension.

However, Captain Riesling and St. Stephen may not have been the first aliens to visit Blackmoor. John Snider's Star Empires game quickly affected the Blackmoor campaign. Greg Svenson has the following information on the alien races involved:

There were eight major empires. Three were humanoid empires with one each of ursoid (bears), feline (cats), avian(birds), amoboid (amobas) and icthioid (fish). There were also a variety of minor empires with just a couple of worlds inhabited by exotic races (along with the normal ones above) [...] We had encounters in Blackmoor with both human and avian scouts (Scott Belfry ran the avian empire). I remember someone getting a 'magic cape' that allowed the wearer to fly (the avians wings were no longer functional, so they created alternate ways to fly). The Blue Rider's armor was a suit of powered Battledress. I was running a galactic empire controlled by a race of ursoids 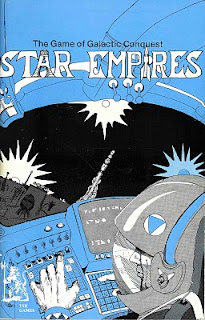 Unfortunately, Blackmoor proved to be a dangerous place for little aliens. Svenson reports that the Star System from the Star Empire's campaign in which Blackmoor had been placed was considered to be a risky place to visit:


[The Star System]was almost immediately quarrantined due to the loss of several scout ships from two empires, one human and one avian...