I was pretty excited to share the first Blackmoor 5E adventure in the Shattered Empires series with you all yesteday. If you are not a fan of D&D 5th Edition, I still recommend you check that one out because it should be fairly easy to convert to your favorite edition too.

If you are interested in the Blackmoor: Shattered Empires Campaign, I have now uploaded 3 additional files with handouts and certificates for Episode 1.

What's coming up in the next few days? We can now reveal a bit more as we are approaching Dave Arneson Game Day:

For those who don't know, Blackmoor the MMRPG was a Living Blackmoor Campaign, organized by Dave Arneson's company Zeitgeist Games and played at conventions. Four seasons of adventures for D&D 3rd Edition were written and originally appeared on the official Blackmoor website. All of these are now available as free downloads at The Comeback Inn with permission from Zeitgeist Games. What not everyone knows is that there were plans for a 4E version of the MMRPG as well. Not only were there plans, but a few adventures and some supplementary material was actually written. I will release the first adventure tomorrow!

Did you see the Dave Arneson documentary, Secrets of Blackmoor? It was just announced that they have begun filming for the sequel. Read more about that here.

As I mentioned yesterday, this sourcebook written by Greg Svenson and edited by the author of this blog (yes, me!) will be released on October 1st. 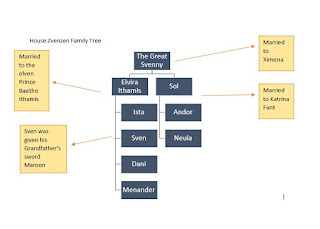 Above is a family tree representation that I created for Greg's book. Did I mention that the book will also have a small section written by Dave Arneson? I think many of you will really like this book!