I have earlied brushed upon the subject of evil player characters in Dave Arneson's Blackmoor campaign. The first evil wizard in the Blackmoor game and this the first evil wizard in roleplaying history was played by one of the original Blackmoor players, a young man named Kurt Krey. His character was known as Captain Krey.Captain Krey started out as one of The Fant’s allies, helping his friends take back Blackmoor after Baron Wesely ("The Weasel") had sold them out to the Egg’s forces. However, as most Wizards, Krey sought magical power. One person could offer him this: Soukup the Balrog. Soukup was none other than the Egg’s lieutenant and Krey betrayed Fant for the magic offered by Soukup. 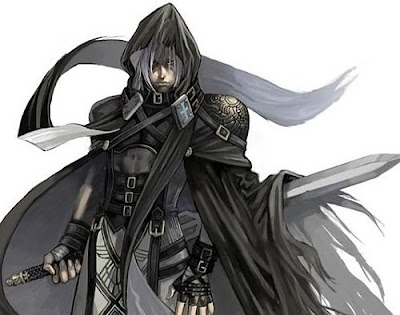 Unfortunately, Soukup’s plan to overtake Blackmoor failed and Krey had to flee the realm. At first he sought refuge in the Realm of the Egg, but found that he was not welcome there. He wandered into the cold realm of the Skandaharians. On the Skandaharian Coast, he boarded a ship and recognized a southerner travelling with the norsemen. He was one of the Fant’s allies, Robert the Bald:

“Like David, I am a big fan of anything naval, and I knew that if I went through the woods I would reach the coast and could run into the Skandaharians. David thougt I was crazy, but he could not talk me out of trying. My dice rolling was fantastically lucky, and I made it through the woods to the coast. I joined the Skandaharians and went on several voyages with them.”-Bob Meyer

On the ship, Krey kept his identity secret from Robert, but the two gradually became friends. As they journeyed the two were also united by their common dislike of the brutal Skandaharian captain. Robert challenged the captain to a duel and defeated him, with Krey keeping the crew at bay. Robert now assumed command of the vessel. Together they travelled through the Firefrost Canal and into the Black Swamps, making their way to Blackmoor:

“…the journey up the river back to Blackmoor was so hazardous that I lost most of the crew before reaching Blackmoor bay, and Gertie (the dragon in the bay) soon took care of the ship. The wizard managed to drag me to shore, along with a couple of the men. He then disappeared to where he really wanted to go. All of this adventuring was over a period of time of a couple of months, and Greg was actually the Gamemaster for the trip up the river. “-Bob Meyer

What happened to Captain Krey after this remains a mystery…


More about Captain Krey at the Comeback Inn Forum