After reading the innovative articles about Dwarves and Gnomes of the Dwimmermount Setting, over at Grognardia, I wanted to write something about the Dwarves of Blackmoor. Dwarves in the Blackmoor Campaign are perhaps of a more traditional kind, but still fairly interesting:


The Dwarves of Blackmoor are a dying race. 500 years ago things were different. Under the leadership of dwarven hero Uberstar Kazakhum, the dwarves began exploring the north in search of minerals. Was it simple green that drove them? Was it simple market economics; The Thonian Empire was in need of minerals and the dwarves sought new sources to fill that market? Or did the dwarves, like other groups after them, actively seen to leave the lands of Thonia. Regardless, it is clear that the dwarves have little love for the Empire. Oberstar has been a staunch supporter of Uther since his break with the Emperor and the current dwarven leader, Lortz Kharnundrhum, has followed the policy of his predecessor managing to overcome his people’s suspicions towards Uther’s alliance with the Elves of The Redwood.

The dwarven colonization of the North at first seemed promising. The dwarven settlement of North Delving expanded from the original settlement in the Crystal Peak Mountains to include the Black Hills, the Iron Hills, the Dragon Hills and the Stormkiller Mountains. The magically fused minerals of Blackmoor were of particular interest to the Wizards of the region, something which lead to great wealth for the dwarves. Their main competitor in providing minerals is the Duchy of the Peaks, but the unstable nature of that Duchy meant that they didn’t make for much of a financial threat to the position of the dwarves. 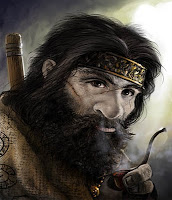 However, life in the North has not been kind to the dwarves. After over 500 years, the great dwarven settlement has been reduced to fewer than 10.000 individuals. 6 consecutive wars with the Orcs have taken a dramatic toll on the dwarves.  Desperation could be another reason for them deciding to ally with Blackmoor. The Empire never really cared about the North, until they realized they could not have it anymore. The realization of the fact that the dwarves are losing to the Orcs have also lead the dwarves to exploring other means of fighting. Ventures into new technology in order to create war machines are not just a curious past-time to the dwarves. It is a question of the survival of their entire race.

The strange inventions which have appeared over the recent decades in Northern Delving have lead to speculation of some unknown source of technological lore hidden deep in the dwarven lands (As discussed in this blog article). The infusion of Gnomes into the dwarven population about 200 years ago also lead to great progress in the field of technology. The dwarves had the resources and much of the base technology in place, but the Gnomes could provide precision, given their long tradition as clockmakers. Finally, Uthers establishing of the University of Blackmoor could lend the dwarves the expertise they would need In order to take their knowledge to a whole new level. However, the latest war with the Orcs is going in the wrong direction and prevents further cooperation with the humans until it is resolved. Heroes are needed!

My Dwarven Timeline can be found at the Comeback Inn: http://blackmoor.mystara.net/forums/viewtopic.php?t=528