I will not claim to be a great DM. Some of my campaigns have been hugely successful. Others have been total disasters. When I do succeed, I suppose I can take some credit for the result, but largely it is also due to the players. Roleplaying is a collaborative effort and a campaign is developed by the group rather than a single individual. 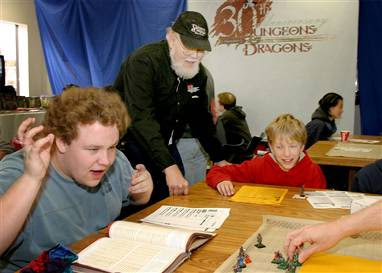 Dave Arneson recognized this. As early as in the First Fantasy campaign, he credits players such as Greg Svenson and Richard Snider as having had a heavy impact on Blackmoor. Others are also mentioned, scattered around in the text. As Dave's 30 year spanning campaign developed, he allowed other players to have their input on how the campaign evolved. When ZGG published the D20 Dave Arneson's Blackmoor Sourcebook in 2003, Dave also credited the players he considered the Original Blackmoor Players.

Blackmoor fan, Finarvyn, made a compilation of the players known to have taken part in Arneson's campaign over the years, confirmed by Dave Arneson himself:


* The Soukup brothers were added again as per Svenny's comments.


Internet claim (can someone confirm this?)
Joe Vail – Dwarves Frick & Frack; vampire-dwarf slaves the "Fang-ettes"
Note: This name was NOT on Dave’s list, either.