In May 2008, someone at Wizards of the Coast decided they wanted to reorganize their forums. An unfortunate consequence of this was the decision to merge all of the "Other Worlds" forums, that is forums dedicated to settings no longer supported by WotC. Some of these forums were quite dead, but several including Dark Sun, Dragonlance and Mystara were highly active. Others, like the Spelljammer Forum had their small group of loyal fans. The forums were focal points for fan communities of varying sizes. A merger of the forums would result in everything being thrown into one big pot, it would be difficult to find topics you were interested in etc etc. Furthermore, the fans were not warned of this, but a few days in advance and there was seemingly no way of reversing the process either. Frustration lead to action. Fans of different settings, all now found themselves without a "home". Joining forces, these fans set up a forum of their own, which they named The Piazza. 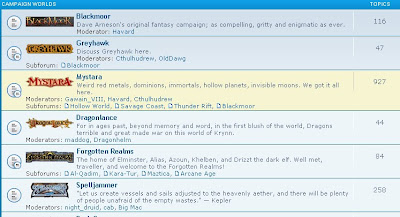 There were other D&D fan forums out there, most dedicated to one setting or to specific editions of D&D. The Piazza's focus was on multiple settings independent of preferred ruleset. It was a huge success! Roughly a year and a half later, the community now has over 500 members and extremely active forums. Moreover, the site is characterized by a highly friendly atmosphere. This might be surprising since the group might have reason to feel bitter about their treatment by WotC. However, the focus has not been complaining about the past, but rather about building somthing new. Lately, the forum has also attracted several prominent game designers, such as Monte Cook, Tim Beach, Colin McComb, Allen Varney, Trampas Whiteman, Andrew Steven Harris, James Mishler, Geoff Gander, Robert S Conley, Aaron Infante-Levy, Adam Miller and others.

In May 2009, Ashtagon, The Piazza's highly dedicated webmaster, made the Blackmoor forum (which had started out as a subforum for Mystara and Greyhawk) into a fully independent forum alongside that of the other worlds. At this point, almost 700 posts have been made in the Blackmoor forum alone. If you havent done so already, go and check it out! :)