"...we could call [Mello] a Hobbit back in those days, before the Tolkien family objected)." -Greg Svenson 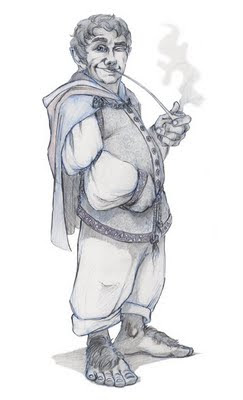 Like most D&D worlds, Blackmoor has its share of halflings. In the D20 line there are two races of Halflings, one type simply called halflings and the second, the Docrae. The regular Halflings are, true to the source quite similar to those found in Tolkien.

Dustin Clingman has the following to add:

"Well they are much more prone to travelling than Tolkien's hobbits. In fact, some of the largest distributors in Blackmoor are owned and operated by halflings. That doesn't jive with Tolkien. I would also suggest that they are more prone to a 'larger view' of the world rather than just focusing on Booh and South Pim."

The main halfling settlement, Booh, is a Large Town of 2700 inhabitants. The town is dwarfed by the huge and ancient watch tower which gives the town its name. The town is a typical halfling one, with beautiful gardens and in no short of foodstuffs and fermented beverages. A large system of caves is found beneath Booh, used by the Halflings to store food and for military purposes. The largest population of Docrae has also settled there. Ramshead is another Halfling Town (pop 1000), where Philo is Sherrif. South Pim has also been reported to have halfling inhabitants. IMC Kenville is also a Halfling town, just because the name sounds a bit Halfling-ish.

The most famous Halflings are Philo Holbytyn, Mello Feathertoes and Timothy Curlytop. Mello, originally played by Rick Johnson, is described by Greg Svenson as the "mightiest of halflings". Known as the worlds tallest halfling, he worked closely with the Blue Rider (played by Bill Heaton) and the two worked hard to prevent Nichol's merchant Mafia from taking over Blackmoor Town in their days.

Currently, there is an ongoing discussion about Blackmoor's halflings in this Piazza thread.