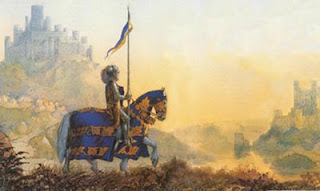 Here are some themes which the Blackmoor Setting lends itself well to explore:

Hope and Despair
Blackmoor is surrounded by enemies. These all seek to destroy the young kingdom, hating all its values. Together they could easily crush Blackmoor. However, the enemies of Blackmoor are not allies among themselves. This is what gives Blackmoor a fighting chance. It is important then, that Blackmoor is something worth fighting for. A realm of justice, honor and valour, in a world of corruption, greed and deceit. And there is hope, that perhaps Blackmoor could defeat its enemies, one at a time, and thus make the world a better place.

Heroes
Blackmoor is known for its legendary characters. The North is a place where young men and women come to prove their worth and seek out fortune and glory. One day some of them may even be counted among the King's Companions.

Sword & Sorcery
Unlike the later TSR settings which sort of grew into a genre of its own, Blackmoor is closer to the Sword & Sorcery genre started by authors like RE Howards and which was still widespread in the 1970s. I will get back what some of that means further down.

Importance of Humans
Elves, Dwarves, Halflings, Docrae and other races exist in Blackmoor, but humans play a dominant role in this setting. The demihumans only have minor realms in the area, while there are many human kingdoms. Some of Blackmoor's most dangerous enemies such as the Thonians, Skandaharians and the Afridhi are also human.

Chaos vs. Order – Cities vs. Wilderness
Whereas Good vs Evil a central theme in Tolkien's Middle Earth an many of the worlds inspired by it, Sword & Sorcery settings often focus on other concepts such as Chaos vs. Order. In the world of Conan, Cities represent decay and corruption, lies and deceit. It is the wild and barbaric where one finds the truly noble qualities. Blackmoor also represents order, while surrounded by The decandent Great Kingdom of Thonia to the south, the fanatic Afridhi to the west and the bloodthirsty Skandahar to the North. You also have the extreme form of decadence with the Duchy of the Peaks and Chaos made manifest in the Egg of Coot. Similarly you have idealized barbarians in the form of the Peshwa as well as Marfeldt the Barbarian who is a friend of Blackmoor.

Cthulhu Mythos – R.E. Howard style
While this isn't clearly expressed in Blackmoor, there are hints of darkness remaining from an older age, just like in REH's Conan writings. Dark Gods and sinister cults may be found in the deep corners of the world. The Egg of Coot is a prime example of this. The cult of the Frog is an example of the many evil cults that may be encountered. In Lovecraft's visions, the horrors drive men insane. In REH's works, they exist mainly to be defeated. Chaos and Evil can destroy the weak, but the strong and noble can defeat these forces. This is ofcourse at the center of Blackmoor.

Ancient World
Another trait shared with Conan, Blackmoor is appears more as an ancient world than a medieval one. Thonia seems similar to Rome or the early Byzantine empire. The Afridhi also have traits borrowed from the ancient Persians. Creatures of the Lost World may still be encountered here, such as great lizards or creatures from the Ice Age.

The North
The region of Blackmoor is known as the North. This should have significance. In my campaign, I made the climate more like that of northern Europe, and did the same with the fauna. Since Blackmoor also has an Ancient World feel, Wooly Mammoths, Wooly Rhinos, Saber-Toothed Tigers and Great Eagles are some of the creatures that may be encountered in this setting. This works even better if you use the assumption that Blackmoor is set in Mystara's past.

Technology
Technology is another feature of Blackmoor that is not so often seen in traditional fantasy settings. It is mostly linked to wizards. They create Golem-like warriors and clockwork body parts. Other such wonders stem from the Valley of the Ancients. The Egg of Coot may be a source of technology as well. Its technology is a dark one though, combining technomancy with necromancy, thus enhancing its undead servants.