The players still remember the day when Dave Arneson placed a large ceramic frog from his mother's garden on the gaming table. This was their first meeting with the Temple of the Frog, an adventure location which would be the focus of four different published modules for three different editions of D&D spanning three decades. Something dark stirred that day, and the players grew nervous.... 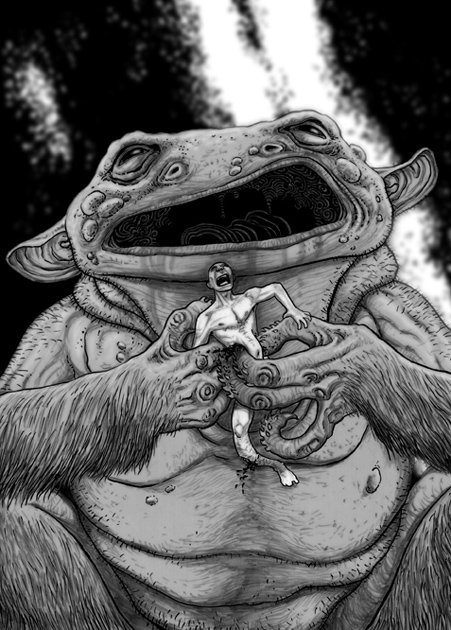 The order of the Frog, the religious group who used the infamous temple as their base of operations had been organized by St. Stephen, played by Stephen Rocheford. Last month, I described how Arneson and Rocheford came up with this idea back in the spring of 1973. At the time, the Blackmoor players had relocated to the swampy environs of Lake Gloomy and the Temple was located just a few days travel to the south.

St. Stephen himself may have been a cynical manipulator, his religion a trick to be able to control the followers of the cult. Imagine his surprise when the monks of the temple began channeling divine magic. Who had been manipulating who here, the alien may have wondered. Was the idea for the cult really his, or had the idea come from those strange whispers in his head? Who was the true master of the Temple of the Frog?

Over at the Comeback Inn Forum, Jeff Berry explains where the Frogmen came from:


"...all three of the 'first three' (Dave, Gary, and Phil [Prof. Barker]) all affected each other; you have to remember just how small the gaming world was back then. I'd be willing to say that this forum has more members then were around in the Twin Cities and Lake Geneva *combined*. Both Dave and Gary were hugely impressed at Phil's work on Tekumel dating back to the 1950's, and he in turn was impressed by their ability to run games and write the rules needed for those games. The D&D world-settings became a lot more detailed and 'culturally aware' after Phil's work became familiar to Gary and Dave. Likewise. Phil elaborated on elements of Tekumel that he'd largely neglected until he'd had a chance to work with Dave and Gary. [...] All three had frogmen because all three read a lot of H. P. Lovecraft, and you just had to have frogmen and other servants of the Old Ones infesting the place; it gave the players something to do when they weren't exploring the dungeons."


Frogmen need not be the only thing that wandered off out from the Cthulhu Mythos and into the Blackmoor Campaign. The Mythos also has a Frog-like deity; Tsathoggua created by Clark Ashton Smith:

"In that secret cave in the bowels of Voormithadreth . . . abides from eldermost eons the god Tsathoggua. You shall know Tsathoggua by his great girth and his batlike furriness and the look of a sleepy black toad which he has eternally. He will rise not from his place, even in the ravening of hunger, but will wait in divine slothfulness for the sacrifice."
—Clark Ashton Smith, "The Seven Geases" (1933)

Tsathoggua also has a counterpart in Stodos of the Icy Wates in the Mystara Setting, a setting which incidentally is also linked to Asthon Smith's universe through Tom Moldvay's classic module X2: Castle Amber (Chateaû d'Ambreville).

One thing is certain. There is a great power lurking behind the Temple of the Frog. There is a reason why the Temple keeps resurfacing. And that power is nowhere near being defeated.