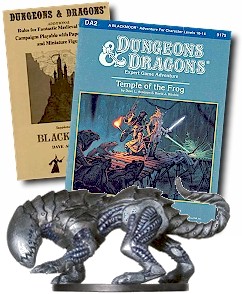 Recently there have been a lot of speculations to the nature of the Arneson Ritchie working relationship. As most of you will know David J Ritchie was the co-author of DA modules 1-3 and the only author listed for DA4. Over the years, some have questioned to what degree the DA modules could be considered Arneson’s work. Perhaps the credits on the covers were simply a nod to the original creator and nothing else? And why was Arneson’s name omitted from DA4? My attempts to reach David J Ritchie have so far been unsuccessful. Dustin Clingman has earlier stated that Arneson was consulted on the DA modules, but it has been unclear to what extent this consultation.


“Dave Arneson worked with Dave Richie on DA1-3. His contract with TSR gave him the right to review all Blackmoor material before it was published, but DA4 was published before he was able to review. So, that was most of his problem with that module.”

Not only was Ritchie working based on notes submitted by Arneson over the years, but he was also able to review the modules with the exception of DA4. This confirms my suspicion that Arneson had significant influence over these products. In the case of DA4, there has been a lot of discussion to whether there were specific elements in that module that Arneson directly objected to, but Greg’s comment above does not seem to support this. In addition Greg reveals that:

“I am also sure that he objected to the fact that the Ran of Ah Foo, the leader of one one of Blackmoor's major enemies, was not even mentioned in the module. All the rest of this discussion […] is just speculation.”

The absence of the Ran of Ah Foo was indeed a surprise given the importance of this archvillain in the FFC. David Ross raised the question of Ran's disappearance in the Blackmoor Fan gazetteer and suggested that he might have died, but this explanation seemed less than satisfactory.It makes sense that this is something Arneson would have changed, had he been given time to review the module.