City of the Gods: Bringing the Mystery back

Fans of the so called Golden Age D&D from the 1970s and early 80s sometimes criticizes later era game material for suffering from a need to create too much coherence, explaining much more than is really neccessary in order to run a fun game. The downside of this is of course that it detracts from what is important and even takes away some of the mystery. 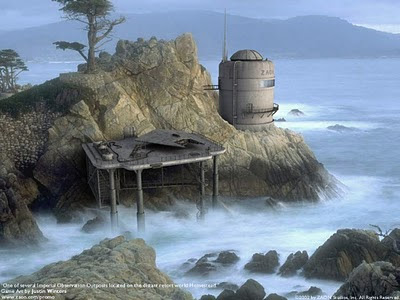 Now, this is not normally my view of things. I am very interested in early age D&D, but I am also a fan of many of the products that were made in later decades. When looking at the various versions of City of the Gods, I am beginning to think that they were right. The best source to Dave Arneson's original version of City of the Gods is Rob Kuntz' account from the game Dave ran for him and Gary Gygax. The FFC also has references to the City of the Gods, but is fairly vague on the details.

While the 1970s sources are clear on the fact that the City of the Gods is a source of technology, it is Ritchie and Arneson's DA3 which introduces the space ship and its crewmembers. Granted, Stephen Rocklin goes all the way back to Supplement II, but even there it is unclear to whether St. Stephen is from space, another dimension or what. The vagueness of the nature of the city makes it more mysterious, leaving room for each player and DM to figure things out for themselves.