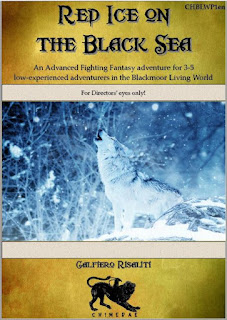 Earlier this year, on Dave Arneson Day 2018, Yaztromo, a regular at the Comeback Inn announced that a group of European Blackmoor fans have been working to create a Blackmoor Fan Guide for Advanced Fighting Fantasy the Roleplaying Game (AFF). I didn't know much about AFF, but it is a roleplaying game based on the old Advanced Fighting Fantasy Game books from the 1980s. 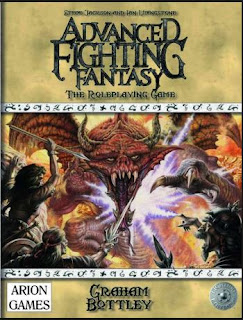 Now, I was amazed at the production value of this Blackmoor adaptation, both in terms of layout and design, but also that this was written by people who clearly are very familiar with Blackmoor ranging from the older material by Dave Arneson and TSR, but also the material created by Dave Arneson's company Zeitgeistgames in the mid 2000s.

Now, a new adventure has been created for Living Blackmoor, which is the name adopted by the AFF version of Blackmoor. This adventure explores the northern shores of Blackmoor's world and beyond to the realm of Frisia.

Get this fan adventure for free at The Comeback Inn!