I recently recieved news of this new adventure inspired by Dave Arneson's Blackmoor. It is written by Carlos Lising of CASL entertainment. The module is announced as the official module of DaveCon, a convention to commemorate Dave Arneson's legacy next month and will presumably be sold or given out to attendees of the convention. The convention has drawn some criticism for not involving Dave Arneson's family, but has been described as a passion project of its founder Victor Dorso. 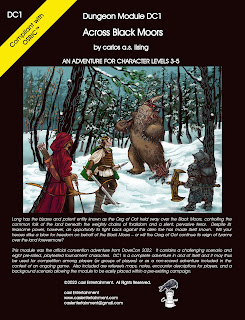 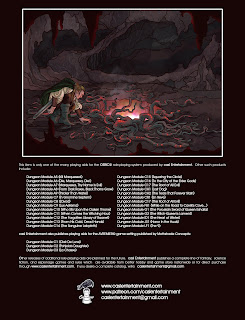 "DC1 Compliant with OSRIC.
Dungeon Module DC1 Across Black Moors. By carlos a.lising. An adventure for characters levels 3-5
Long has the bizarre and potent entity known as Orrg of Oot held sway over the Black Moors, controlling the common folk of the land beneath the weighty chains of thralldom and a silent, pervasive terror. Despite its fearsome power, however, an opportunity to fight back against this alien foe has made itself known. Will your heroes strike a blow for freedom on behalf of the Black Moors - or will the Oorg of Oot continue its reign of tyranny over the land forevermore?
This module was the official adventure from DaveCon 2022. It contains a challenging scenario and eight pre-rolled, playtested tournament characters. DC1 is a complete adventure in and of itself and may thus be used for competition among players (pr groups of players) or as a non-scored adventure included in the cnotext of an ongoing game. Also included are referees's maps, notes, encounter descriptions for players, and a background scenario allowing the module to be easily placed withing a pre-existing campaign."

The cover blurb quoted above is of great interest to me. The villain's name is spelled Orrg of Oot and Oorg of Ooot in the same paragraph, but it is obvious that it is a nod to the alternate names given to the Egg of Coot in Dave Arneson's First Fantasy Campaign, where the names  Ogg of Ot and Orrg er Druig were presented as two aliases of this legendary Blackmoor villain. The description of the Black Moors as being ruled by this being suggests that the adventure takes place before Blackmoor was liberated by the elves and long before the DA modules or the ZGG D20 version of Blackmoor. My immediate thought is that the module will be harder to reconcile with the Greyhawk version of Blackmoor, but the blurb does say it can be easily integrated into any pre-existing campaign.
Across the Black Moors is not the first gaming product to be created as a tribute to the legacy of Dave Arneson of course. We also have Dragons at Dawn and Champions of Zed both by DH Boggs, Rob S Conley's Blackmarsh well as the excellent campaigns and sourcebooks organized at the Comeback Inn Forum. Greg Svenson The Lost Dungeons of Tonnisborg feels like its  more than a tribute, but I wanted to mention it anyway. More on that later.
What other Dave Arneson inspired games may we see in the future?
Did I forget anything? Please let me know in the comments!
-Havard
at March 21, 2022