Dave Arneson enjoyed using miniatures for his game. However it wasn't untill after 2003 that a line of Blackmoor Miniatures were produced. They were manufactured by Lance & Laser Miniatures and included the following: 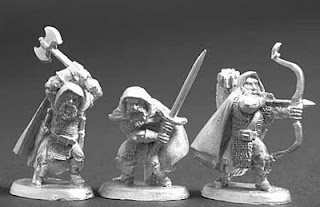 The above are three Afridhi Warriors. They are pretty much in line with the way the Afridhi were depicted in the ZG material. I always imagined them to be more exotic though, more Persian or perhaps even African. The models are nice, but they look more like man-sized Fire Giants. Which may have been the idea.

The models above are Ash Goblins. This is a race that was introduced in the D20 Dave Arneson's Blackmoor Sourcebook. They are goblins that have been exposed to the effects of the Valley of the Ancients (Radiation?), mutating with horns and other strange features. 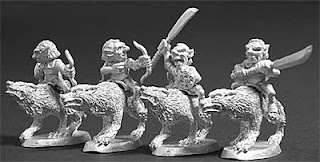 Next models up (above) are Ash Goblin Wolf Riders. I guess they can be pretty menacing when charging down from the Dragon Hills...

These three models are Beastmen. If I remember correctly, these models cam with loads of different beastial heads so that you could mix and match bodies and heads. Beastmen were introduced to the Blackmoor mythos through Mystara. In the Mystara version, there are no Orcs in the Blackmoorian Age, just Beastmen. Beastmen were also included in the D20 Sourcebook, though the D20 line also has Orcs.

The final models are Thouls. A classic Monster that appeared in OD&D and Classic D&D. In other additions, Thouls were associated with the Mystara line, appearing in the Mystara Monsterous Appendix and appeared under the Mystara logo in 3E conversions.

One other miniature was also produced. It was a limited edition miniature of Toska Rusa. If anyone has pictures of this miniature, I would very much like to see them! Also, I don't own any of the miniatures above. Lane & Laser seems to have disappeared so I have no idea where I can get these. Ebay perhaps?