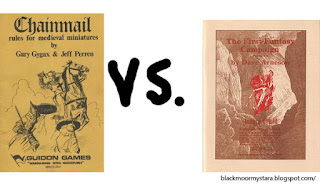 This is something I have been planning to write about for a while, but a recent discussion with my friend Brynjar and others on Facebook inspired me to finally get to writing. I am not really sure anyone has ever actually made the ridiculous claim that Blackmoor was nothing more than a variant of Chainmail, the miniature skirmish game by Gary Gygax and Jeff Perren. On the other hand, gaming amateur historians, Wikipedia contributors and other fans have in recent years seemed obsessed with proving Dave Arneson wrong, when he claimed that he only used the Chainmail combat system during a few sessions and then pretty much discarded it completely.

It is true that we need to to be critical to claims made by Dave Arneson when the process leading up to the creation of D&D involved if we wish to know the truth. It is clear that he had stakes involved in this debate. But am I the only one with the impression that people aren't giving Dave the same benefit of doubt that we are giving the other side? The most common argument used to defend this line of thoughts is that we can find the truth based on written documentation. However, Gary Gygax had the full resources of TSR on his side. He was also active in publishing various fanzines in the decades before D&D was published. The fact that there is alot of documentation supporting the claims he made does not equal the truth however.


Ultimately we will never know how much of Chainmail Dave Arneson used. In the First Fantasy Campaign there are many references to creatures and units from Chainmail, so he clearly borrowed those. As to the rules themselves, Dave kept most of those secret even from the players, so that part will boil down to whether you trust his word or whether you don't.

However, I think this whole discussion misses some central points. What we should really talk about is the very nature of these games and how different they are from eachother. Chainmail (by Gygax and Perren) is a miniatures game for running skirmish battles between small units. It was also not primarily a fantasy game, the few pages dedicated to fantasy at the end were added as an afterthought. Blackmoor on the other hand was a game that featured single character roleplaying, a Game Master running the monsters (somewhat later in the campaign), dungeon exploration and level advancement. All in a living fantasy environment. Dave Arneson may have borrowed ideas from Gygax and Perren, but he also borrowed ideas from Dave Wesely's Braunstein games, his own long experience in Napoleonic Wargaming, various board games and many other sources. And, just like Gary did his game design, Dave used input and ideas from his players, many of whom went on to become prominent game designers themselves.

While there might be similarities between what Dave did and those other games he looked at did, it seems clear to me that he was very much doing his own thing with Blackmoor. Not only was Blackmoor a different game, but it was also a different genre of game. When Dave Arneson demonstrated Blackmoor to Gary Gygax in 1972, Gary was already looking for a new game to publish. After having played with Dave as a Dungeon Master, Gary was convinced that he had found what he was looking for. Dave and Gary proceeded to sit down and design a new game that they would call Dungeons and Dragons. They did not sit down to design Chainmail 3rd edition. Both men realized that they had something new on their hands, though I doubt either man realized how revolutionary that game would truly become.

This article isn't written as an attack on Gary Gygax' legacy. But I think we are doing both men a disservice if we ignore the radically new ideas that arose with Blackmoor and was brought into the world's very first published roleplaying game: Dungeons & Dragons.


More on this discussion here.