In the ongoing Play by Forum game, my DM Rafe just posted the following:


My dear friends of the "Company of the Maiden",
and all those others who come here to read of your adventures!
For the fourth Episode in our sequence of scenarios and adventures,
we will deviate from the usual format:
Instead of presenting you a number of cutscenes, we will do a little bit of "meta".
As of the time I write this text, the game that has become "The Last Fantasy Campaign"
is about to enter its seventh year of consecutive action.
Now, before we enter the last battle, the "hour of woes and shattered shields, when the age of men comes crashing down"...
Let's take a moment and look back at those many years of gaming. 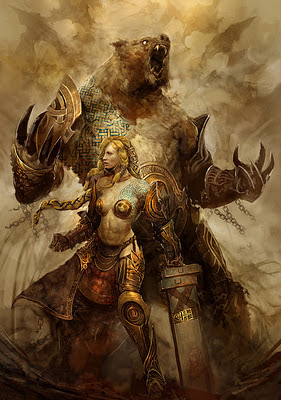 One pretty unique aspect of our game is that we have basically followed the same plots since the beginning;
before we enter the final stage of the game, I would like to shed some light onto them,
so my players and eventual lurkers know what has been going so far:
The First Part of the "Last Fantasy Campaign": The Grim Winter Cycle
In an earlier commentary on the series, I defined four basic plotlines:
The Egg Arc, The Thonian Arc, The Westryn Arc, and The Veil Arc; all of them developed by the players' actions,
mainly over the course of "The Grim Winter" and its companion games, which would be "The War of the Thieves",
and "The Road".
For me, as a DM, the Grim Winter was storyboard HELL, mainly because I had to make up most of the stories on the spot;
and while I now arrogantly boast that there are very few people other than Havard and me that know the setting
as thoroughly as we do, this was certainly not the case in 2005, when I started our campaign.
"The Grim Winter, Episode I" was just a random title I chose for its epicness, after a rather unpleasant experience
in my text production class in English, when my professor very strongly suggested that I should expand my vocabulary.
This was really the reason I got into PBP games first and foremost. To become a better teacher, GAAAH.
The game I started was really just a mix of two already published scenarios - one created by the good people at http://www.fraternityofshadows.com,
another by a Polish D20-producer, "The Forge", that later on would become famous as an illustration studio.
At that point, while I had a lot of fun charging the initial members of the party
(of which only the characters Erdath and Sven remain in the game today)
through an inn haunted by a ridiculously-hard-to-kill demon girl (our "Maiden"),
I never entertained the idea to make the game more than a one-shot.
My change of heart was really most caused by Greg, who plays the character Sven Ithamis in our game:
He told me his character's family history to such a detail that I couldn't but get hooked on it;
so emerged the idea of putting Sven and his companions against the other noble of note (to me) that Blackmoor
could muster, Bascom Ungulian.
In my version of the story, the baron of Glendower had been enthralled by the infamous Egg of Coot,
during his (canonical) rescue of his wife from the Orcish realm of Ohmfet;
you can read about this in some of the earlier cutscenes.
It would have been a f-a-b-u-l-o-u-s story, about how "The Company of the Maiden",
bearing now the curse of the epinomous demon-child,
hunted down the mad baron, twarted his murder attempt of King Uther, and finally fought him in the
famous dungeons of Glendower.
Alas, what happened? :) GAME happened; rarely did players in any of my games ever miss a plot so hard as
our group did with the Ungulian arc. :D ...And so, we kind of moved our focus.
Frankly, I am glad: My first attempt at the story was not even half as entertaining as what we later created together.
Also, the real reason for the party essentially failing the Ungulian arc was really nobody's fault:
The main reason for the many inconsistencies that an interested reader will find in our game logs was that the party roster
changed continuously within the first four Episodes of The Grim Winter.
In a party of eight, we had about fifteen people enter and leave within a year and a half,
until the group that we have today started to form. That made it virtually impossible to keep a consistent story:
From the assassin sent out to kill Sven (Mandle), to the magician unknowingly transporting Ran's phylactery (Morghrum),
well, you see: Dozens of story threads that would later prove an effort to weave together again in "The Promised Land"...
In retrospect, I wonder if I could have done this better, but then again,
who would have thought that this turned into the huge thing... :)
What remained about the story about Ungulian was really Ran,
who would turn into the party's major tormentor, and ultimately, the evil mastermind of all bad things.
I took Ran, word by word, from "The First Fantasy Campaign", where he is described as an android.
(If you follow the game, this just should explain SO MUCH.)
How sketchy my idea of him was, though, you can see in "The War of the Thieves":
If that game had gone at a faster pace, it would likely have been him that the party fought at the end of that game.
("The War of the Thieves" was very closely modelled after the mega-adventure "The Lost City of Gaxmoor",
by Troll Lord Games. If youwant to get an idea how the action would have developed, had we sticked to our
initial plan, take a look at that book, if you want.)
The last two episodes, that would detail the war between the Afridhi and the Blackmoorian army,
they were really just a bonus, because I enjoyed the game so much.
That we left the game open ended was really not so much planned;
had the party killed Ran during the Battle of the Longest Day, that would have been about it.
But they didn't.
...And so, a sequel.
...To be continued.

This looks like its going to be an interesting experience. More details here.