The Gods Welcome You: Immortality in the Game 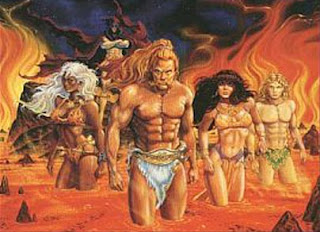 Dennis Laffey presents various examples of how such adventures have a presedence in mythology. Critics who claim that this should not be handled as part of the standard level progression should take another look at the Master Rules. Reaching Immortality is in no way a direct result of having reached 36th level, but rather a unique undertaking separate from the general level progression and reserved for unique heroes whose adventures will become legends retold for centuries to come.

I think a common pit fall in Internet discussions about D&D is that we end up talking about what a D&D game should be about and what it should not. One things I love about D&D is that it can be anything you want. This is one of the reasons why I prefer RPGs to Boardgames. One of the great things about the BECMI expansions was that it introduced new possibilities to what D&D could be about.

Similarly, we know that Dave Arneson would be open to pretty much any idea that came up in his games, giving rise to the description of his gaming style as "Gonzo". While the subject of ascending to Godhood was not a common theme in Arneson's campaign, Bob Meyer who played the powerful wizard Robert the Bald shared this story:


Personally, I not only survived these adventures, but I acquired enough interesting things to study that I ended up locked away in my tower studying them. This all proved to be my undoing, as I was the first of the original players (and one of only two I am aware of) to reach the highest possible level in David's rules. When I asked David what happened now, he told me that"The Gods welcome me". I lost Robert the Bald to David's control and had to start a new character.