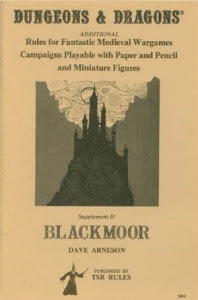 Well, certainly it was, but as it turns out only parts of what appeared in D&D Supplement II: Blackmoor was written by Dave Arneson himself. Over at the Dragonsfoot Forums , people have been investigating which parts of Supplement II were Arneson's. In a recent post, Aldarron sums it like this:

Arnesons material in Supp II;
Temple of the Frog, pretty much straight from Arneson, with light editing by Kask. Marsh's statement that Gygax converted it must be a misunderstanding, generalizing from the rest of Arnesons material (which was somewhat converted by Kask). My reason for saying this is that anyone who has read TotF will be struck by all the non standard FFC like approaches, mechanics and terminology used. There's nothing Gygaxian about it, not even the way stats or lack thereof are presented.

The Disease section was straight from Arneson with only light editing by Kask. (I asked him, see pages 138-40 of Q&A here on DF and a few pages earlier for monk topic). Arneson also wrote a similar article on diseases for the first Pegasus magazine.

The hit location was perhaps a little more closely edited but was also from Arneson.

The Assasin , including the assasination table, was "reimagined" from Arnesonian material to conform to "standard" Greyhawk D&D. (same Q&A with Tim Kask pages). Arneson, on his web page, mentions a backstabbing thief arising in Blackmoor - likely the progenetor of the Assasin, since the D&D thief came from another gaming group and was first written up by Gygax.

The rest of the material in Supp II came from other people.


Apparently, Arneson provided enough material for an entire supplement himself, but other people at TSR considered the rest of the material "unusable". One can only wonder what this submitted, but never published material might have been. Some have speculated that this remaining material was what made it to become the First Fantasy Campaign Supplement. If so, it is great that Arneson with the help of Bob Bledsaw of Judges Guild made the material available. It is interesting that TSR decided not to make more use of what Arneson submitted. It has been suggested that it had to do with the quality of the material, but I suspect it had as much to do with understanding Arneson's ideas, which at times were quite different from that of Gygax.