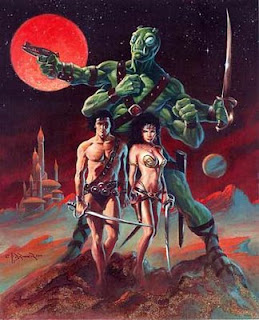 Back when Arneson ran his games, notions of the genres of science fiction and fantasy had not become segmented as they are today. In literature spaceships and aliens would often appear in fantasy tales. This made it easier for Arneson to experiment more with the genre in his Blackmoor games, experimentation which is probably one of the things that made Blackmoor different from many later D&D settings. In his latest blog entry, Robert S Conley identifies Science Fantasy as one of the growing trends of the Old School renaissance.

The best known example of Science Fantasy in Blackmoor is of course the City of the Gods, but already in Supplement II, the Temple of the Frog features aliens, laser weapons and other technology. All of this was apparent in Arneson's early games as well. Empire of the Petal Throne creator Professor MAR Barker had connections with Arneson (whether the professor played in Blackmoor is yet to be confirmed) and may have influenced eachothers creations in many ways, including the science fiction element found in both Blackmoor and Tekumel. According to Greg Svenson, the science fiction element of the game dated back to its earliest days:

"...several of the initial players were playing 20th C types who were transplanted into the Blackmoor world (which according to Wesley and Maker was before my first dungeon adventure), so the Sci Fi link was there from the beginning."

I wonder if the lack of emphasis on science fantasy in the D20 Blackmoor line might not have been an opportunity missed. It would have clearly defined Blackmoor in a yet to be explored niche. On the other hand, many still feel uncomfortable with combining these two genres.