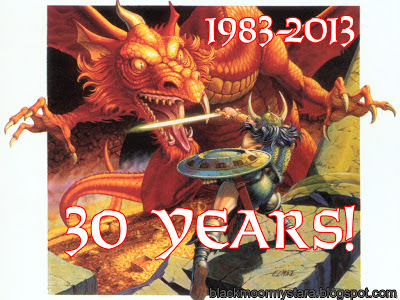 While there hasn't been much talk about it over at wizards.com, this year marks 30 years of gaming with the legendary Red Box Basic Set! The red box with the iconic Larry Elmore Dragon was first published in May 1983. This was also the edition that marked the international launch of D&D, turning the game into a worldwide hobby with the box being translated to 44 different languages. With tens of millions of copies sold, the Red Box basic set marked what undoubtedly the best selling product throughout the history of TSR. 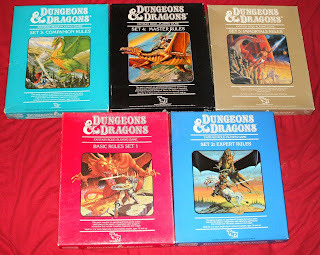 Written by Frank Mentzer (credited as editor, as policy was back then), this was the edition that included the legendary intro adventure featuring the tragic death of Aleena the Cleric at the hands of the evil Wizard Bargle. The Red Box was the first in a line of five boxes which would take characters from 1st level to 36th and beyond that into further adventures as Immortals.  Known later by hard core fans as the BECMI edition (Basic - Expert - Companion - Master - Immortals), this edition took the classic line of D&D (as opposed to the Advanced Dungeons & Dragons line) to its full potential. The first two boxed sets, Basic and Expert, built heavily on the works of Gary Gygax, Dave Arneson, John Eric Holmes, Tom Moldvay and David Cook. From the Companion Rules and onwards, the series began to explore unknown territory allowing not only the traditional exploration of dungeons and wilderness, but also having your characters become rulers of kingdoms, control armies, explore the Outer Planes and eventually become god-like beings of legend. 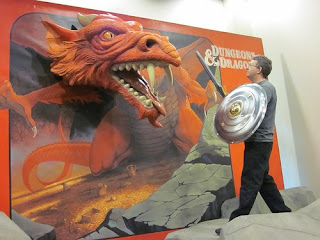 Sometimes mistakenly  believed to be a "kids version" of  the Advanced Dungeons & Dragons game, the BECMI series in fact created an elegant balance between a ruleset that was easy to get into with the Red Box, but with an increasing complexity to rival that of AD&D as you progressed through the series. The series also offered a return to the Known World, previously introduced in the Moldvay/Cook B/X ruleset of 1981, which would eventually develop into the World of Mystara. BECMI would also later become the rule framework that would allow Blackmoor's return with the DA modules (Dave Arneson Series).

With the vast number of gamers introduced to the hobby of Roleplaying Games through the Red Box, 1983 was clearly a significant year in the history of gaming. Time to celebrate!