As I mentioned in my blog article on Dinosaurs the other day, the First Fantasy Campaign reports of a great battle in Blackmoor Bay between sea vessels and sea monsters. In the same article, I also speculated that the aquatic dinosaurs from OD&D Supplement II. Let's take a closer look at these creatures:


Mososaurus:
These Gigantic marine lizards are over 40 ft long. They sometimes use their great bodies to overturn ships. Fortunately their main diet is other aquatic beasts. 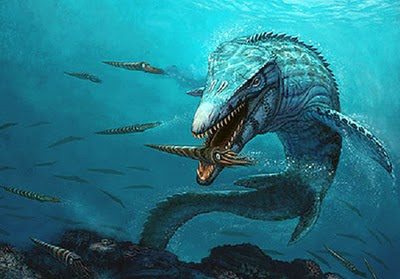 Elasmosaurus:
This creature is about 14 m (46 ft) in length and weighed over 2,000 kg (2.2 tons), making it the second longest plesiosaur. It has a large body and four flippers for limbs. More than half of its length is its neck, which had more than 70 vertebrae, more than any other animal. It has a relatively small head with sharp teeth. According to Supplement II, it loves snatching crewmen from ships. 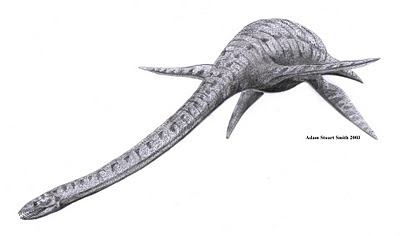 Plesiosaurus:
These huge serpents have short necks, but large heads. They will not hesitate to attack ships venturing into their territories. 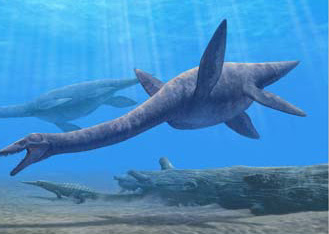 These are but a few of the various aquatic monsters mentioned in Supplement II. It seems likely that these creatures have some times been encountered in the deep rivers of the swamps near Blackmoor and in the Black Sea. Some speculate that these monsters are being bred in the realm of the Egg. Perhaps the Egg also has some way of controlling the beasts. Fortunately not all denizens of the Black Sea are this hostile.