Over at the Comeback Inn, my friend Rafael started an interesting discussion about which literary works may have influenced Blackmoor. Dave Arneson himself commented on this in a 2004 interview:

"As far as books go, fantasy books, science fiction/fantasy books that inspired me, we’re talking about Poul Anderson, Robert Heinlein, and a lot of the other authors, like the author of the Horse Clans series. (Robert Adams) Gary [Gygax] Seems to have listed every book he’s ever read in his bibliography, and I’ll be blunt, I don’t think I’ve read a lot of those books. Although, after having read a few thousand books, I really can’t remember which ones I’ve read anymore… So a lot of it is, Yes, I was inspired by…; but where does the inspiration stop and the game design begin? I mean, you’ve got to make changes. You’ve got to do variations. You can be influenced by something you read and don’t even remember reading, because you want to include “oh here is something neat I can incorporate into my world."

Fritz Leiber, creator of Fafhrd, the Gray Mouser and Lankhmar, is one of the authors Gygax often credited as an author who influenced him, but did Leiber have any influence on Arneson's game? I had seen no indication of this until I noticed this: 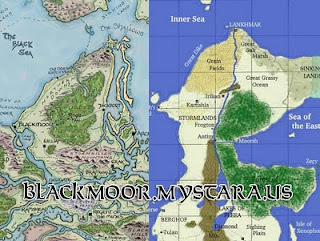 The Sinking Lands and Frogton both have their Blackmoorian equivalents. Furthermore, given their position in the landscape, could the Blackmoorian City of Maus be inspired by Leiber's Lankhmar? Maus could even be a reference to the Grey Mouser. The City of Maus is not unlike Leiber's city. Both are wealthy, corrupt and dominated by thieves guilds. Where Leiber's famous charaters dominate his city, Arneson's version is home to Debelfry, the rogue originally played by Scott Belfry.

While we may never get any confirmation to these speculations, it seems like it would be a good idea to use the AD&D and (Mongoose) RuneQuest Lankhmar gaming source books to flesh out a game in Maus. Between that material and Harley Stroh's short story "A Night in Maus", you should have a pretty good idea of what the city's atmosphere is like.