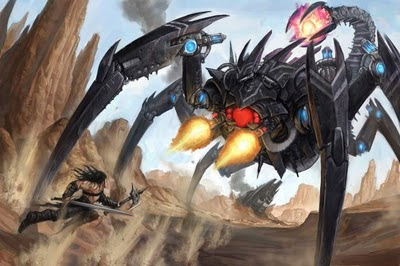 Pathfinder is doing really well these days. I am no expert on this game or its setting, Golarion, but as with everything from Paizo, the books look great. I was pleasantly surprised to discover the Golarion nation of Numeria, which seems to have alot in common with Blackmoor. I asked about this in a discussion over at the Piazza and it was pointed out to me that Golarion pays a great deal of homage to Greyhawk. Since Greyhawk has a Blackmoor, then Golarion should have one too.

A German D&D forum describes Numeria as a cross between Blackmoor and Expedition to Barrier Peaks. The most significant similarity is that during a cataclysmic event known as the Rain of Stars,

"a metal mountain fell from the sky and lit up the plains of Numeria, modern scholars believe it to be a vessel of some sort but that night it was a raging fireball."

This vessel from the stars, is apparently the source of the technological wonders which is an overarching theme to this nation. Furthermore, the capital of Starfall, shares many traits with Blackmoor's Starport and the Duchy of the Peaks in general. Numeria's ruler, the Black Sovereign, seems like a cross between the Iron Duke of Thonia and the Egg of Coot. The Black Sovereign is supported by technology oriented wizards and mechanical constructs. The people living outside the cities of Numeria are described in a way that reminds me of Peshwah. It is great to see that Dave Arneson's ideas were so strong that they keep showing up in new games and settings.

Email ThisBlogThis!Share to TwitterShare to FacebookShare to Pinterest
Labels: Duchy of the Peaks, Egg of Coot, paizo, Pathfinder, Peshwah, Piazza