I have previously talked about how since in the 70s the line between the fantasy and science fiction genres was not so defined, Dave Arneson was able to include various sci fi elements into his fantasy game. It is odd however, that in the later decades Dinosaurs were to be considered more acceptable in the science fiction genre (through time travel or genetics for instance) than in the realm of fantasy. The best known example of Dinosaurs in D&D is probably X1 - the Isle of Dread (1980), by David Cook and Tom Moldvay. However, Dinosaurs appeared in D&D years before that legendary module was published. Although several people contributed to Supplement II, the Dinosaurs in that book are believed to be Arneson's work. 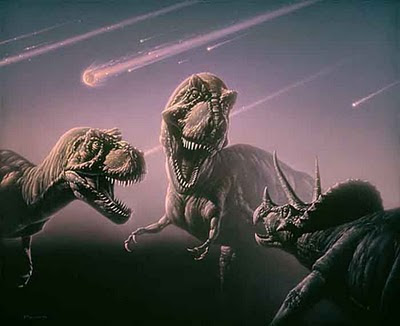 Three types of Dinosaurs were found in Supplement II: Elasomosaurus, Plesiosaurus and the Mosasaurus. All of these are aquatic creatures, which may have been useful for the naval battles Arneson enjoyed running. The FFC mentions a legendary battle in Blackmoor Bay between sea vessels and sea monsters, in which the sea monsters won! These sea monsters may in fact have been the Dinosaurs from Supplement II.

The DA series includes a few species of Dinosaur-like creatures such as Pteranodons, which are believed to have been spawned by the Egg of Coot. In the ZGG Blackmoor CS, the Egg of Coot is also said to spawn sea monsters such as the dreaded Naliseth, so perhaps the Egg is also responsible for the other great creatures roaming the lands of Blackmoor? Supplement II describes the Plesiosaurus as an endangered species, so perhaps the Egg is bringing ancient creatures back from extinction?

How common were Dinosaurs in Arneson's Blackmoor campaign? That is hard to say. It is easy to forget that the original Blackmoor campaign was mostly a regular D&D campaign, along with Gygax' and Kuntz' Greyhawk models for all D&D games to follow them. It is still interesting to take a look at the features that were not so often followed up on in later games. Dinosaurs being one of them.

And Dinosaurs did show up in Arneson's games from time to time, as Greg Svenson recalls:


The most recent adventure I played with Dave Arneson as DM included an encounter with a pair of T-Rexes.

Most Sea Going Dinosaurs are probably found in the North Sea, a few finding their way into the Black Sea, or even the Skandaharian Sea in the distant north. Land based dinosaurs like the Tyrannosauruses would have to be very rare. However they have been seen not far from Blackmoor itself:

I can recall battling T-Rex's several times in Blackmoor, including a recent encounter south of Kenville on an adventure a couple of years ago when I was playing as Svenny's son Sol.

Distant lands may hold more of these creatures, in particular if you link your Blackmoor campaign to the JG Wilderlands Setting. Even Svenson's experiences suggest that dangerous creatures lurk beyond the borders of Blackmoor:

They seems to be found more commonly on the south side of the Root River.

How common is unknown, but it seems likely that the Thonian Empire have their share of trouble with monsterous lizards roaming the countryside. That sounds like adventuring opportunities to me, which was probably Arneson's idea all along!