Denizens of the Black Sea 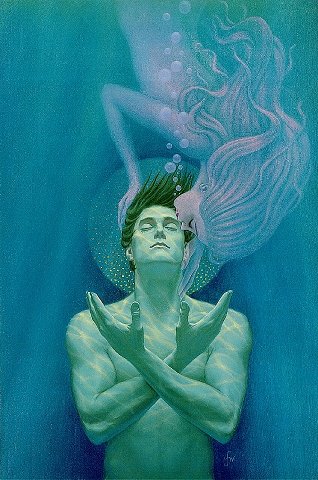 The Black Sea is the sea to the north of Blackmoor. Until about a century ago, it was merely a great lake surrounded by land on all sides, and connected to the Skandaharian Sea to the north by the enormous Firefrost Canal. In the years that followed, the land began to change. The Black Sea grew as some of the lands surrounding it began to sink, creating disastrous floods across the northern Redwood. Unknown to all at the time, this was the Egg of Coot preparing for its ascension to the surface. As the realm of the Egg rose from the Sea, other lands around the Black Sea began to sink, wrecking havoc in the lands of humans and elves. This altering of the landscape caused the Black Sea to join with the Great Ocean (North Sea), changing the water in the Black Sea from fresh water to brackish water.

The Sar-Aigu
The oldest known civilization to have existed beneath the water of the Black Sea was the race of the Sar-Aigu. These mysterious Sea Devils share their origin with that of the Temple of the Frog, but soon found their way from the swamps and into the Black Sea. Eventually they gained the courage to rise from beneath the waves and build their stronghold on land, on the peninsula which would later be the site of Castle Blackmoor. They remained there until driven back into the sea by a greater evil. They were never heard from again, though they may still be lurking down there in the deep.

Merfolk
The Black Sea is also home to other intelligent life. The Merfolk of the Black Sea are said to have a civilization which “rivals that of humans” (Supplement II). They use Giant Seahorses (Hippocampi) as mounts and their warriors favor the trident.  Rumours speak of great Merfolk cities on the bottom of the sea. They maintain regular underwater communities where schools of fish are kept penned in with nets for food. Dolphins are allies of the Merfolk and the two races often work together.

It is difficult to say how the Egg’s devastating alteration of the seas affected the Merfolk. They seem to have been able to adapt from living in a fresh water environment to living in a saltier one.  The joining of the Black Sea and the North Sea allowed more clans of Skandaharians to get access to the Black Sea and the Merfolk quickly learned of the ruthlessness of the Northmen (See DA4 for details). Some speculate that it was in fact the Merfolk who accidentally awakened the Egg of Coot from its long slumber.

Sea Monsters
Both the Black Sea and the rivers that run through the Dismal Swamp are filled with various Sea Monsters. Many of these are believed to be spawned by the Egg of Coot. This is true in the case of the dreaded Sea Serpents known as Naliseth whose blood can turn drowning men into zombie like creatures. The Egg of Coot has used Sea Monsters in its attacks on Blackmoor, something that has proved to be quite successful against Blackmoor’s navy (See the FFC)

More ideas for underwater adventures in the Black Sea can be found here.