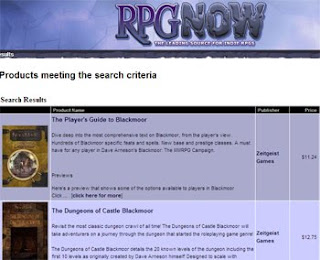 Well, they are still here! In the beginning of December I suggested there might only be one month left to buy Blackmoor products. I guess I was wrong! Code Monkey Publishing (CMP) did say the lisence would end early 2010 which is a fairly vague phrase.

Having hear no word on the matter from either ZGG or CMP this year, I figured checking the online stores would be a good way of finding out if anything is happening to the situation.

RPGNow/Drivethru have the best offers for pdfs that I have seen so far. If you have some money left after Christmas, I guess you still have a chance to complete your collection.